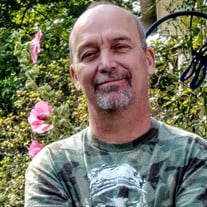 Allan David Pierson, age 64, of Kincheloe, Michigan, passed away unexpectedly at War Memorial Hospital on November 23, 2021, in Sault Ste. Marie, Michigan. He was born on January 27, 1957, in Manistique, Michigan, to Ronald Jack and Sarah Jean (Reno) Pierson. Allan grew up in Munising, Michigan, and graduated from Mather High School in 1975. After high school he enjoyed life and then met Cherrie Lynn Martin in 1980. Allan and Cherrie married on March 19, 1982, in Marquette, Michigan. They began their family in 1983, while Allan worked various jobs in Munising. They made the move to Kincheloe, and Allan began working for Superior Fabrication. He enjoyed his job and the various people he worked with. Allan was getting ready to retire in January, after working for thirty-two years with Superior Fabrication. Allan was a homebody. He liked woodworking and all kinds of gardening. He cherished his time with his family and friends. Allan was a remarkable man that left an imprint on everyone he met. He was a kind and loving partner to Cherrie, as well as an amazing father and grandfather to his family. He loved his dogs, especially Stella. Anyone willing to visit could count on a smile, a friendly conversation, a couple rib pokes, and a cold beer. Allan is survived by his wife, Cherrie Pierson of Kincheloe; children, Derek (Sarah) Pierson of Kincheloe, Alicia (Brandon) Ross of Rudyard, Michigan, Samantha (Nathan) Cremeans of Rudyard, Ronald (Harlee) Pierson of Kincheloe; grandchildren, Kalin, Even, Sophia, Owen, Lyric, Mya, Emma, Liam, and Brandy; mother, Sarah Pierson of Munising; brother, Rory (Steph) Pierson of Munising; sisters, Gina (John) Barkley and Lisa (Bruce) Muzyckzka both of Black Water Falls, Wisconsin; brothers & sisters-in-law, Dennis (Carol) Martin of Gladstone, Michigan, Sue (Jan) Golisek, David (Becky) Martin, Kim (Steve) Swanberg, Philip Martin all of Munising, Penny (Bill) DesArmo of Sheboygan, Wisconsin, and Leonard (Linda) Martin of Christmas, Michigan; and many nieces & nephews. Allan is preceded in death by his father, Ronald Pierson; grandchildren, Andy & Zoey Cremeans; father & mother-in-law, Leonard & Margaret Martin. A Celebration of life will be held in the Summer of 2022. Galer Funeral Homes & Cremation in Pickford, Michigan is serving the family. Condolences may be sent to the family at www.galerfuneralhomes.com.

The family of Allan David Pierson created this Life Tributes page to make it easy to share your memories.

Send flowers to the Pierson family.