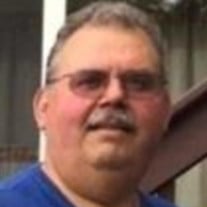 Anthony Joseph Lane, 61, of Sault Ste. Marie, MI, passed away Tuesday, November 24, 2020 at War Memorial Hospital. Tony was born September 25, 1959, in Sault Ste. Marie, MI, the son of Ronald and Muriel Lane. He graduated from Ogemaw Heights High School. Growing up, he enjoyed spending time with family and friends. He was happy to drive around listening to music, hang out at the local pizzeria, playing foosball, and show his love by teasing relentlessly. He had many interests and hobbies, but the love he had for his family and friends outshone all. Often described as a gentle giant, he was caring and showed unwavering support to all. Tony met the love of his life, Maggie Lane, and quickly realized they were meant to spend their lives together. They married in May of 1993 and went on to have two daughters, Veronica and Jessica Lane. His heart opened wide to include his step-children John, Loretta, Keith, and Lance. Taking care of and raising his family was something he took pride in. He was the true definition of a family man, and an anchor to many. Tony not only took pride in his family, but in his career as well. He worked as a surveillance technician for many years. As he grew older, he enjoyed all the different aspects of his life. He was very crafty and loved to work with his hands. He and his wife were both avid campers, and spent the summers at different campgrounds and family campouts. He took pride in maintaining his yard and home year round. In the fall, he enjoyed canning food and going on drives to see the fall colors. In September of 2019 Tony became a grandpa for the first time to his only grandson, Anthony “Bibbity” John Lane. From the moment Tony saw him, he was absolutely in love. AJ is his pride and joy. He cherished all the time he spent together with his grandson; they watched sports together, took naps together, and he enjoyed every second as grandpa. He was especially excited to see AJ take his first steps. They have an unbreakable bond that will forever be cherished. Tony is survived by wife, Maggie Lane; daughters, Veronica Lane, Jessica Lane, and Loretta (Pat) Maleport; sons, John Krull, Keith (Nikki) Krull, and Lance Krull; sisters, Cathy Hess, Kimberly (Joe) Schutz, Vicki Sumner, and Muriel Lynne (Brian) Evans; brother, John (Lori) Lane; and grandson, Anthony Lane. He is also survived by many loving brother-in-laws, sister-in-laws, aunts, uncles, nieces, nephews, cousins, and friends. Tony is predeceased by his parents, Ronald and Muriel Lane; and parents-in-law, Loretta and Bernard Krull. He is also predeceased by loving grandparents, uncles, sister-in-laws, and friends. Visitation will be Thursday, December 3, 2020 at Holy Name of Mary Pro-Cathedral Catholic Church from 10:00am until 11:00am. Memorial service will be Thursday, December 3, 2020 at Holy Name of Mary Pro-Cathedral Catholic Church at 11:00am with Father Nicholas Thompson as Celebrant. Immediately following Tony will be brought to Oaklawn Cemetery to be in his final resting place. A celebration of life will be held later in 2021. The world has lost an amazing man who will never be forgotten by all who knew him. Clark Funeral Cremation Burial Services assisted the family with arrangements. Online condolences may be left at www.rgalrfuneralhome.com

The family of Anthony Joseph Lane created this Life Tributes page to make it easy to share your memories.

Send flowers to the Lane family.