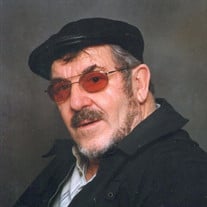 Mr. Anthony “Tony” Fehrenbach, age 88, died on January 21, 2022, at Evergreen Living Center in St. Ignace, Michgian. He was born October 20, 1933, in Hornchurch Essex, England. The son of Wilfred and Winifred Fehrenbach. At the age of 17, with his father, he left a war-torn England by ship sailing to Canada. His mother and sister joined them soon after. In 1965, he moved to Detroit, Michigan. Two years later, he gained his US citizenship. He met and married his first wife Betty Leighton and to this union three children were born. He moved to Flint, Michigan, and resided there for 30 years. This is where he met and married his second wife, Ella. They relocated to Northern Michigan in 1999, eventually making their way to and settling in St. Ignace. Tony found a church home in Glen Memorial Baptist church in St. Ignace. In 2005, he was baptized and accepted Jesus Christ as his Lord and Savior. Tony loved traveling and driving, he worked in transportation the majority of his life. He drove everything from taxies to buses, local to distant. He also became the owner and operator of his very own “Teddy Tours” tourist bus. Tony was very creative man and his hobbies and interests included woodworking, writing poetry, drawing and painting. He often told stories of being a small kid and surviving WWII in England. He always spoke of fond memories with his mother. He always flew two flags, one British and American. He loved his coffee/tea and donuts. His son, Kevin Fehrenbach would say about Tony, “He was always on the move and now he has moved on.” Tony’s laughter and witty sense of humor will surely be missed. Tony leaves to cherish his memory, wife Ella Fehrenbach of St. Ignace; brother-in-law, Raymond Hanton of Waterloo, Ontario, Canada; daughters, Karen Fehrenbach of Gaines, Michigan, and Kimberly (Jeff) Falcon of Linden, Michigan; son, Kevin Fehrenbach of Holly, Michigan; stepdaughter, Felicia Lay of Clarksville, Tennessee; stepsons, Willie Lay and Kervin (Kietsa) Lay, both of Jackson, Mississippi, Undre (Neisha) Lay and Rundre (Tina) Lay both of Clarksville; grandson, Kyle Mikat of Linden; nieces, Kristen Fong and Leslie Bentley both of Waterloo, Ontario; and a list of many great nieces and nephews. He also leaves to cherish his memory a very close and dear friend, Wayne Foote of St. Ignace. He was preceded in death by his father, Wilfred Fehrenbach; mother, Winifred Fehrenbach; sister, Wendy Hanton; and step-children, Crystal Lay and Dennis Body. A Memorial Gathering for Tony will be held at Galer Dodson Funeral Home, 240 McCann Street in St. Ignace, Michigan, on February 7, 2022, from 2:00 PM to 3:00 PM with a 3:00 PM service to follow. Galer Dodson Funeral Homes & Cremation in St. Ignace, Michigan, is serving the family. Condolences may be sent to the family at www.galerfuneralhomes.com.

The family of Anthony "Tony" Theodore Fehrenbach created this Life Tributes page to make it easy to share your memories.