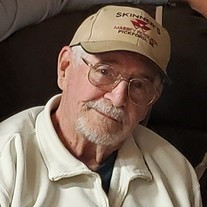 Arthur Henry Potter, Sr., age 86, died peacefully at his home on September 16, 2020 on Drummond Island, Michigan, surrounded by his family. He was born on October 27, 1933, in Stonington, Connecticut to Harry Dimon and Jessie Felkner (Thoene)... View Obituary & Service Information

The family of Arthur Henry Potter, Sr. created this Life Tributes page to make it easy to share your memories.

Send flowers to the Potter family.