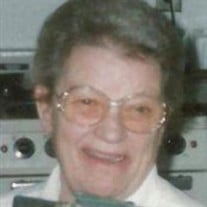 Barbara Ann (Haller) Waid, age 91, of Raber, Michigan, died on January 3, 2022, at War Memorial Hospital in Sault Ste. Marie, Michigan. She was born on January 18, 1930, in Swanton, Ohio, to parents John Haller and Margaret Audrey (Johns) Haller. Barbara spent her youth in Ohio before moving to Arkansas where she met her husband, Kenneth Waid, during a double date with friends. They married on February 7, 1950, and moved to Detroit, Michigan and then to Montrose, Michigan, where they lived for over 20 years. She got a job at General Motors where she worked until they adopted their grandsons, Alvin James Brainerd III and Leonard Earl Brainerd (Ken Vargas). Barbara became a homemaker to raise her grandsons and to aid the local Catholic Church as a Foster Home Operator. After her husband retried, they moved to Raber, Michigan. Barbara was a devout Pentecostal and loved her church; she was also a supporter of the American Cancer Society, Home for Disabled Veterans Society and a part of the Epilepsy Foundation. Barbara enjoyed tending to her, nearly acre-large, garden and walking around Raber. She often listened to the bible during her free time. She was a talented crocheter and made Afghans blankets for all her family members. She loved playing Euchre with her friends and spending time with her dog. Barbara was a woman who loved her family and friends with all her heart and will be greatly missed. Barbara is survived by her grandsons, Alvin James Brainerd III and Leonard Earl Brainerd (Kenneth Raul Vargas); great-grandchildren, Brittani Brainerd, Michael Brainerd, Sebastion (Megan) Brainerd, Melissa Brainerd, Katie Vargas, Kenneth Brainerd, Mya Vargas, Saira-Beth Brainerd, Autumn Brainerd, Star (Stocking) Vargas and several nieces and nephews as well as great-great grandchildren, Alanna-Nicole, and Scarlett-Rose. Barbara is preceded in death by her parents; husband, Kenneth; daughter, Ruby G. Darany; and sisters, Virginia, Daisy, and Edith. A Visitation will be held May 18th, 2022, at Galer Funeral Homes in Pickford, Michigan from 11:00 AM until 12:00 PM with a Noon funeral service to follow. Burial will be at North Raber Cemetery in the spring. Memorials may be left in Barbara’s honor to the American Cancer Society. Galer Funeral Homes & Cremation in Pickford, Michigan is serving the family. Condolences may be sent to the family at www.galerfuneralhomes.com.

The family of Barbara Ann Waid created this Life Tributes page to make it easy to share your memories.

Send flowers to the Waid family.