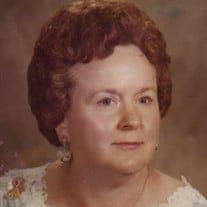 Betty Jean (Adams) Lipsett, age 96, of Cedarville, Michigan, died October 18, 2021, in Sault Ste. Marie, Michigan. She was born January 23, 1925, in Sault Ste. Marie, to George Ernest Edward Adams and Margaret Maretta "Retta" (Lackey) Adams. Betty grew up in Donaldson (Bruce Township), Michigan, and graduated from Pickford High School in 1943. She ventured out in a group of ten young women to Detroit where she worked in a secretary pool at Briggs Manufacturing, an airplane manufacturer, during WWII. She also worked for the United States Department of Agriculture and at the Pickford Post Office. She married Ford Lewis Lipsett on November 26, 1945, at the Pickford Methodist Church. She and Ford purchased property in Cedarville where they built a resort, they named Ford's Cottages which they operated from 1949 until 1985. They lived in Florida for six to eight months every winter and after Ford died in 1994, Betty continued to make the trip with her dog Prince as her traveling companion. She sold her Florida home in 2003 and returned to Cedarville full time. Betty was a member of the First Union Church in Cedarville for over 70 years and had served on the church board. She was a lifetime member and was very active in the Eastern Star Chapter #82 in Sault Ste. Marie. She traveled extensively to Eastern Star events as she served on many committees and as a state officer. Betty prepared the Annual Masonic Dinner, in Cedarville, for many years. She also served as an officer of the Les Cheneaux Chamber of Commerce and on the Les Cheneaux School Board. Betty enjoyed crafting items in stained glass. She loved her family deeply and the family looked up to her as the family matriarch. She was the ultimate hostess for family meals and many special events. Betty is survived by her sister and brother-in-law, Marilyn and Charles "Chuck" Crawford of Cedarville; nephews, Richard (Ginger) MacNealy, Bradly (Duncan) MacNealy, Kelly (Libby) MacNealy, and Seth (Lisa) Crawford; nieces-in-law, Darlene Crawford and Margaret Olmstead Garvey; many great and great great nieces and nephews; aunts, Eunice Rang and Catherine Adams; and son-in-law, Robert (Gloria) Mullenix. Betty was preceded in death by her husband, Ford; daughter, Judith Ann Lipsett Mullenix; sister and brother-in-law, Shirley and Richard MacNealy; and nephew, Marc Crawford. Betty's final resting place will be at Oaklawn Chapel Gardens in Bruce Township, with a committal service to be held at a date to be determined later. Memorial contributions may be made to the Clark Township Ambulance Corp., P.O. Box 453, Cedarville, MI 49719 Galer Funeral Homes & Cremation in Pickford, Michigan is serving the family. Condolences may be sent to the family at www.galerfuneralhomes.com.

The family of Betty Jean Lipsett created this Life Tributes page to make it easy to share your memories.

Send flowers to the Lipsett family.