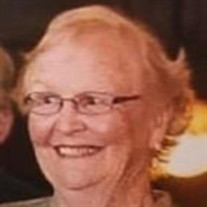 Beverly Ann Honkanen, 87, died Monday, August 31, 2020 in Cedarville, MI. Born on May 17, 1933 in Saginaw, MI to the late Charles and Bernice Riffel, her large family consisted of six amazing brothers, Jim, Bruce, George, Dick, Larry, and Tom, and one beautiful sister, Mary Agnes Green. Upon High School graduation and after attending college, Bev decided to use her skills in the US Army as an accountant stationed at the Chemical Center in Fort Meade, MD. It is here where she met the love of her life, Jim. After two years of the blossoming romance they relocated to Saginaw and were married on November 28, 1953. Soon after Jim began his teaching career in the Detroit school system, the young couple would pack the car and their three young children to spend summers in Brimley at the Birchpoint family cabin with Grandpa Ed and Grandma Anna Honkanen. After Bev and her family moved to Sault Sainte Marie for Jim’s new career at Lake Superior State University, Bev began to nurture her ambitious and many talents. Opening her first business, Bev’s Sewing Boutique, Bev had always dreamed of training the community in dressmaking and tailoring suits after attending design school in Detroit. Utilizing her design skills and use of beautiful fabrics, Bev could not only create formal and wedding dresses from any picture but could also teach her students the same skill. Fast forward a few years later, Bev’s ability to lead her community, led her to a successful run as the City Commissioner and head of the Chamber of Commerce. Looking to improve tourism and local investment, her leadership helped create the Chamber of Commerce building where it still stands today, highlighting the great city of Sault Sainte Marie. Retirement for Bev and Jim allowed them to continue their community involvement, creativity and love of laughter as “Tootles the Clown” and “Jimbo the Juggler.” She also continued her strong faith and commitment as a member of St. Francis Xavier Church, spending countless hours preparing pasties to help support the parish. Bev leaves behind her loving husband Jim, daughter Diane (Scott) Honkanen of Raleigh, NC, son Mike (Pam) Honkanen of Sault Sainte Marie and daughter Linda (Steve) Bryan of Brimley. The matriarch to seven amazing grandchildren bonding together for many summers at “Grandma’s beach”, Steven (Tiffany) Walters, Greg (Sophie) Walters, Michael (Ali) Walters, Andrea (Dan) Eves, Ashley (Nate) Ward, Chelsea (Andy) Howson and David (Kori) Bryan and her 12 beautiful great grandchildren. “Great Grandma Gigi” loved reading stories and watching them just grow every day. Though two more great grandchildren (coming in Jan and March of 2021) will never know this great lady, everyone will share their many joyous and loving experiences for years to come. Mass of Christian Burial will be Monday, September 14, 2020 at 11:00am am at St. Francis Xavier Catholic Church in Brimley with Father Peter Fosu officiating. Visitation will be prior to the funeral mass at 10:00 am at St. Francis Xavier Catholic Church in Brimley. Current health conditions will require everyone to wear a mask and follow mandated social distancing rules. A Celebration of Life in the summer of 2021 will be announced in the coming months. Her final resting place will be at Oaklawn Chapel Gardens. A special thanks to the wonderful staff at Cedar Cove Assisted Living, the McLaren Home Hospice team and War Memorial Hospital staff for the love and care of Beverly. Clark Funeral Cremation Burial Services is serving the family with the arrangements. In lieu of flowers, donations can be made to St. Francis Xavier Church, or the McLaren Home Hospice Center. Online Condolences may be left at www.rgalerfuneralhome.com

The family of Beverly Ann Honkanen created this Life Tributes page to make it easy to share your memories.

Send flowers to the Honkanen family.