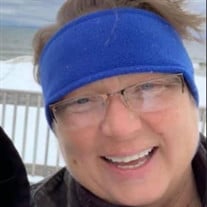 Bonnie Jean Tallman, age 64, of St. Ignace, Michigan, passed away unexpectedly on December 30, 2021. She was born on May 30, 1957, in St. Ignace to parents Edward L. and Frances (McCall) Tallman. Bonnie spent her youth in her hometown of St. Ignace and graduated from LaSalle High School in 1975 at the top of her class. She then went to work at a photo shop in Roger City, Michigan, where she helped to development film, which took her all around Northern Michigan for her work. In 1978, Bonnie packed up her motorcycle and moved all the way to California—meeting longtime partner, Joseph “Joey” Hanson along the long trip. She moved to Las Vegas in 1980 where she began working for Caesars Palace and developed film for Hollywood film and music stars for over 18 years. She moved back to the Upper Peninsula in 1997 with Joey, Bonnie started work for the Mackinac County Road Commission as the first female snowplow driver. The couple spent twenty-eight wonderful years together until Joey’s passing in 2001. Bonnie took care of her elderly mother for the next decade while working for the county & spending time with her nieces and nephews. She retired in December 2020. Bonnie was a member of the Sault Tribe of Chippewa Indians. Bonnie was a very crafty woman. She and her friend Kyle handcrafted jewelry and stamped cards, which they sold. She loved gardening and her plants. She had a beautiful river of daffodils in her yard. Bonnie loved camping and going on excursions with family and friends. She was also a huge rockhound, give her a beach or a gravel pit and she was in her glory. Bonnie was one of the three “Movies Girls”, they have attended one movie a week for the last ten years. Bonnie is survived by her sister; Lori Tallman of St. Ignace; nephews, Audie Paul and Edward Tallman 3rd; nieces, Amanda Arnold; great nieces and nephews, Brice, Alaynah, Braenden, Cailin, Chloe, and Marlee; and uncles Jim (Terry) McCall. and Russ McCall Bonnie is preceded in death by her parents, Edward & Frances; brother, Edward Tallman Jr. and grandmothers, Louise Tallman and Sadie McCall. A Memorial service will be planned for a later date around her birthday when her flowers will be in bloom. She loved her gardens.

Bonnie Jean Tallman, age 64, of St. Ignace, Michigan, passed away unexpectedly on December 30, 2021. She was born on May 30, 1957, in St. Ignace to parents Edward L. and Frances (McCall) Tallman. Bonnie spent her youth in her hometown of St.... View Obituary & Service Information

The family of Bonnie Jean Tallman created this Life Tributes page to make it easy to share your memories.

Send flowers to the Tallman family.