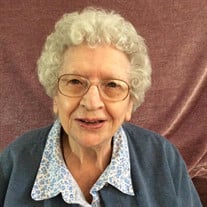 Catherine Mary Gill, age 96, of St. Ignace, Michigan, died October 3, 2021, in Mackinaw City, Michigan. She was born October 8, 1924, in Greenville, Michigan, to Jesse Bryon and Julia Elizabeth (Welch) Palethorpe. Catherine spent her early years in Greenville, but during the Great Depression her family moved between St. Ignace, Petoskey, Michigan, and Florida. She graduated from the Ursuline Academy in St. Ignace in 1941. She met Joseph “Joe” Gill through being friends with his sister. He went into the service, and they married in May of 1945. Catherine spent her working days keeping offices running. Most recently, she was a ticket agent for Starline. She and Joe played a major role in getting the toy drives started in St. Ignace and devoted many hours to that endeavor. Catherine was a member of the St. Ignatius Loyola Catholic Church as well as the Altar Society. She enjoyed shopping, and she and Joe would go to yard sales together every week and travel during the winter. They enjoyed going anywhere that was warm which often brought them south or out west. Catherine is survived by her children, Mary (Ken) Nelson of Brighton, Michigan, John Gill of St. Ignace, and Jim Gill of St. Ignace; grandchildren, Stephanie Nelson, Dana (David) McCarthy, and Ryan Gill; and great-grandchildren, Morgan, Fiona, and Cameron. She was preceded in death by her parents, Jesse and Julia; husband, Joe; sons, Bob Gill and Pat Gill; and sister Reta Barney. A memorial service will be held at St. Ignatius Loyola Catholic Church in St. Ignace on a date to be announced later. Her final resting place will be St. Ignatius Catholic Cemetery. In lieu of flowers, the family would like donations made to local toy drives.

The family of Catherine Mary Gill created this Life Tributes page to make it easy to share your memories.