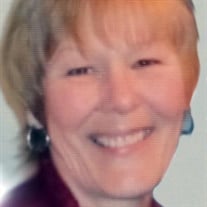 Cathy Lynne Mutafis passed away peacefully with her loved ones by her side on December 15, 2021, at the age of 71. She was born in Detroit, Michigan on February 27, 1950, to Elizabeth and Henry Mack. Cathy was a graduate from Cody High School in Detroit. Her greatest joys in life were her three children along with her grandkids and great grand kids. Cathy married Nick Mutafis on February 3rd, 1973 and would have been celebrating their 49th wedding anniversary this year. Cathy and Nick worked hard during their marriage and soon after they retired, they created their life on Drummond Island & built a small home off the shoreline. You could always find Cathy with a cup of coffee and watching as freighters would go by; and that’s what made island life worth it to her. Cathy was a dedicated sports mom and enjoyed watching or listening to a game on the television during the season. Family was important to her, and she found a way to surround herself with them every chance she could. Being a “Grammy” made her extremely happy and proud. You could always find Cathy outdoors working in the yard where her lawn was immaculate; flowers blooming, vegetables ripening and Poppy’s blooming each new year. She was an amazing woman and will be greatly missed. Cathy is survived by her husband, Nick; children, Kimberly Mutafis of Jackson, Michigan, Nick Mutafis Jr. of Plymouth, Michigan; and Stephen Mutafis of Livonia, Michigan; grandchildren, Sebastian, Stepheny, Skyland, Christopher, Maximus, Luciana, William, Lyla, and Logan; great grandchildren, Ava Quinn, Cohen Sebastian, Nickole Lynne, and Kenneth Jr.; sisters, Debby Newton, Pam (Jerry) Schultz , Nancy (Homer) Powers; brothers, Michael (Karen) Mack, Timothy Mack (Cindi) and Gordon “Gordy” McCue; and many beloved nieces and nephews. Cathy was preceded in death by her parents, Henry R. Sr. and Elizabeth Mae (McCue) Mack, and brother, Henry R. Mack Jr. A Celebration of Life will be held in the Spring of 2022 Galer Funeral Homes & Cremation in Pickford, Michigan is serving the family. Condolences may be sent to the family at www.galerfuneralhomes.com.

Cathy Lynne Mutafis passed away peacefully with her loved ones by her side on December 15, 2021, at the age of 71. She was born in Detroit, Michigan on February 27, 1950, to Elizabeth and Henry Mack. Cathy was a graduate from Cody High School... View Obituary & Service Information

The family of Cathy Lynne Mutafis created this Life Tributes page to make it easy to share your memories.

Cathy Lynne Mutafis passed away peacefully with her loved ones...