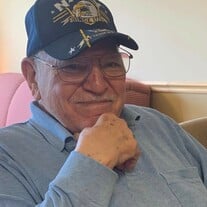 Charles "Carl" Eugene Goudreau, age 89, of Gros Cap, Michigan, passed away peacefully in his sleep on February 14, 2021, at Castle Rock Retirement Center. His wife Pat was by his side. He was born on May 7, 1931, in St. Ignace, Michigan, to William David Goudreau and Edith Emma (Hill) Bertelsen. Carl grew up in St. Ignace and graduated from LaSalle High School in 1951. After graduation, Carl enlisted in the U.S. Navy. He served as Yeoman Second Class aboard the U.S.S. George K. Mackenzie from January 1952 - April 1955, and in the U.S. Naval Examining Center, Great Lakes, IL, April 1955 - January 1957. Carl then attended Ferris Institute, earning a degree in HVAC. His service did not end after his honorable discharge from The U.S. Navy. Carl went on to serve as a member of the SeaBees, a Construction Battalion, as a Utilitiesman - First Class, from April 1974 - May 1992. Carl met Ruth E. Branyan and they married on August 8th, 1953, in Battle Creek, Michigan. After Carl's Navy Career and HVAC Tech School, he took a position in LaCrosse, Wisconsin, at TRANE Cooling and Heating Systems and eventually moved his family home to Michigan, where he took a position with Kelvinator of Grand Rapids in 1964. The family made one more move to St. Joseph, Michigan, where Carl bought their first home and took a position with Whirlpool Corporation, until his retirement from Whirlpool in 1979. Carl moved back to St. Ignace and took a job with the Mackinac Bridge Authority. In 2007, he married Patricia Olsen and they continued to live in Gros Cap. Being born during the depression years shaped Carl's early life and resulted in a lifetime of living off the land he loved so much and being known as the "putterer" who could fix anything. He loved spending countless hours in his workshop and garage fixing, building, and refurbishing things. Later in life he could be found drinking his coffee next to his front window while tinkering on something that needed to be fixed. He built his beautiful retirement log home in Gros Cap from logs cut and milled near St. Ignace. He enjoyed hunting, fishing, working with his hands, and being outdoors. He was very proud of his Native American Heritage and a proud elder member of the Sault Tribe of Chippewa Indians. He loved feeding the birds, chipmunks, and other critters at his home in Gros Cap and spending time at his hunting camp with his sons and their friends. Carl liked cutting wood, playing softball and cooking. He was famous for his fried perch dinners, fried venison steak and home baked wild blueberry pies with berries he and Pat picked during walks in the woods. The last couple years, Carl could often be found in the "puzzle room" working jigsaw puzzles with his fellow residents at Castle Rock or offering to fix things that were broken. Carl expressed his love to his family and neighbors by helping and offering a hand when there was a need. He lovingly helped his four children with their various school projects during their early school years, including building a working steam shovel from a Quaker Oats canister, an elaborate solar system using an antique wagon wheel, and many Boy Scout Pinewood Derby cars. Carl loved tumbling rocks in the garage from one of the many family rock hunting and camping adventures along the shores of the Great Lakes. He made several pieces of jewelry with the many beautiful agates and Petoskey stones he polished and cut. Sunday family drives, weekend camping outings and family vacations were always a highlight for the Goudreau Family. Some favorites were: hunting and gathering asparagus along the country road fence lines in the spring, picking wild blueberries and blackberries near their extended family's farm in Wolverine, Michigan, going smelt fishing in the spring, gathering night crawlers with his boys for fishing bait, and traveling to Florida every Christmas to visit both Carl and Ruth's extended family living there. Carl also loved music and played Alto and Tenor Saxophone in many bands including the Straits Area Municipal Band in his retirement years. He was a member of the St. Ignatius Loyola Catholic Church and enjoyed singing in the church choir with his wife Patricia Olsen, whom he married in 2007. Carl played piano by ear and spent countless hours playing piano and saxophone while his daughter Denise played along on her flute. Carl was always present at his children's school music concerts and Boy Scouting Events and Activities. Carl is survived by his wife, Patricia Goudreau; sons, Charles (Rebecca) Goudreau Jr of St. Ignace, Douglas (Paula) Goudreau of St. Ignace, and Jon (Barb Eckels Rennie) of Traverse City, Michigan; daughters, Denise (Carlos) Martinez of Livermore, California and stepdaughter Fawn Olsen of Florida; grandchildren, Jeremy (Jenny) Goudreau, Kyle (Amanda) Goudreau, Kathleen "Kate" Gardner, Andrew Dirks, Ashley Dirks, Peter Dirks, Jack Goudreau, and James Goudreau; great-grandchild, Jaxson Gardner; brother, Richard "Dick" (Melinda) Goudreau of Cheboygan; sister-in-law, Joan Goudreau of Punta Gorda, Florida; and many nieces and nephews, who referred to him as Uncle Carl. Carl was preceded in death by his parents; brother, William "Bill" Goudreau; sister, Alice "Sis" Hayes; stepson, Paul Olsen; nephews, Mark Goudreau, Richard Goudreau, William "Billy" Goudreau III; and niece, Cari Branyan Jones. Carl's children would like to express their gratitude to Castle Rock Retirement Center for the loving and safe care they provided to their father during his last years of life, especially during the Covid-19 pandemic. A celebration of Carl's life is being planned for a future date, when travel is safe for family members living far away. Interment will be at Gros Cap Cemetery in St. Ignace. Flowers can be sent to Castle Rock Retirement Center for the residents to enjoy.

Charles "Carl" Eugene Goudreau, age 89, of Gros Cap, Michigan, passed away peacefully in his sleep on February 14, 2021, at Castle Rock Retirement Center. His wife Pat was by his side. He was born on May 7, 1931, in St. Ignace, Michigan, to... View Obituary & Service Information

The family of Charles Eugene Goudreau, Sr. created this Life Tributes page to make it easy to share your memories.

Send flowers to the Goudreau family.