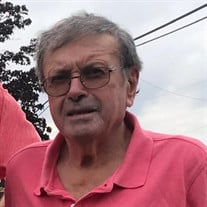 Charles “Charlie” Thomas Lilliquist, 74, of St. Ignace, died Saturday, March 19, 2022, at Hiland Cottage Hospice House in Petoskey. He was born in Bessemer, October 15, 1947, to Thomas J. and Dorothy Ann (nee Mulcrone) Lilliquist. Mr. Lilliquist grew up around the Ironwood area and attended St. Ambrose High School. He and his brother Mike spent every summer break with their grandparents in St. Ignace. Charlie obtained a degree in business and accounting from Northern Michigan University in Marquette. He worked for a local electric company for a short time before finding a lifelong career with the Mackinac Bridge Authority. He loved his work at the bridge and moved up the ranks over the years. He retired in July 2002 and enjoyed retirement with his good friends and family. He was a member of St. Ignatius of Loyola Catholic Church. Charlie Lilliquist loved boating the upper Great Lakes and Straits of Mackinac area. He enjoyed hunting deer and upland birds, playing cribbage, and playing golf. He scored two holes in one, 26 years apart. Skiing was another favorite activity, and he skied in Colorado and in Switzerland. He traveled all over the United States, as well as in Europe and Canada. Mr. Lilliquist is survived by his brother, Mike Lilliquist of St. Ignace; two nephews and their families, Thomas Cronan Lilliquist of St. Ignace and Michael Cronan Lilliquist, his wife, Jamie, and their son, Cronan Joseph Lilliquist, of St. Ignace; good friends Billy and Margaret LaRocque, and many cousins and dear friends. Mr. Lilliquist was preceded in death by his parents; his grandparents, Charlie and Clara Mulcrone and Henry and Blanche (nee LaRocque) Lilliquist; Aunts, Effie & Mary Mulcrone; numerous aunts and uncles and good friend and golfing buddy, Father Norbert Landreville. An Irish memorial service will be planned for early June. Galer Dodson Funeral Homes and Cremation in St. Ignace is assisting the family with arrangements.

The family of Charles Thomas Lilliquist created this Life Tributes page to make it easy to share your memories.