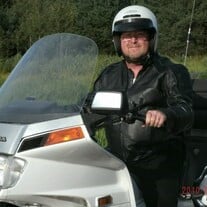 Charles P. Wright, 67, of Sault Ste. Marie, Michigan passed away Tuesday May 4, 2021 at Hospice of the EUP surrounded by his family. He was born August 19, 1953 in Sault Ste. Marie, Michigan to Everett and Margaret Wright. Charles was a man that gave his all. Every moment he had he spent helping others and showing all his tricks of the trade. There was not a thing that man couldn't fix or rig up to work. At home we often called him MacGyver. His favorite times were holding his grandchildren and great grandchildren in his lap as long as they wanted. More than anything Charles loved his wife. Married for 45 years Karen was his life and he would have conquered the world for her. Charles had a love for riding his Goldwing. Up until his last days he begged to take it out. He loved talking about his rides to Sturges and how amazing it felt to ride for hours. Charles was an amazing husband, father, grandpa, uncle, and friend. He will be dearly missed. Charles is survived by his wife, Karen A. Wright; son, Chad (Angela) Wright; daughters, Tina Akers, Jamie Wright, Kris Wright, and Ryin (Pat) Fishell; sister, Linda Clow; grandchildren, Ashley, KarenAnn, Shyanne, Bill, Noah, Charlee, Dameon, Kaysie, Owen, Dillon, and Austin; great grandchildren, Ashton, Elora, Brooklyn, Jaxon, Linkyn, and Myra. Charles is predeceased by his parents, Everett and Margaret Wright and brother, Carl Wright. Clark Hovie Galer Funeral Home assisted the family with arrangements.

The family of Charles Peter Wright created this Life Tributes page to make it easy to share your memories.

Send flowers to the Wright family.