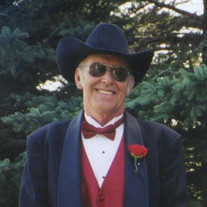 Clinton William Clegg Jr., age 86, of Pickford, Michigan, died with his loving family by his side on March 21, 2022, at his home. He was born in Pickford on July 24, 1935, to Clinton William Sr. and Byrdell (Kerr) Clegg. Clint grew up in his hometown of Pickford, where he attended the Pickford High School. He began working construction on the Mackinac Bridge and on Mackinac Island, Michigan with his dad. He also took part working on Airforce Base construction and for the Escanaba Paper Mill. He also did drywalling in the Detroit, Michigan area for a few years. In 1968, he moved back to the Upper Peninsula and earned his GED from Pickford High School. He then started working for U.S. Steel for a several years. Later he met Maggie and they married on April 12, 1997, in Jellico, Tennessee. He began living out his glory days with the love of his life, Maggie. Clint was an active part of the Pickford community; he was a member of the Sheriff’s Posse of Chippewa and Mackinac County and participated in many ride-a-longs, as he felt no one should ride alone. He also was a member of the Dafter Horse & Pony Organization and the Michigan Quarter Horse Association. Clint started chariot racing at the local county fairs. He was always eager to share his knowledge and help out the kids at the local horse shows and fairs. Clint enjoyed going camping with family, friends, grandchildren, and Wayne & Theresa Jarvie, and also enjoyed hunting with his grandson Garrett. He raised, rode, and bred Quarter Horses and loved spending time at the barn with them. He had a deep love of all things horse related and knew everything there was to know about them—he was like the community vet and provided helpful knowledge and even went on many house calls in the middle of the night to help out any friend in need. Clint and Maggie participated in many horse shows over the years as well as racing at the Mount Pleasant Racetrack. In his free time, he would meet up with his good friends for morning breakfast and a cup of coffee. He made many good friends over the years and will be greatly missed by all who knew him. Clint is survived by his wife, Maggie of Pickford; children, Cathy (Marvin) Chappa of Kincheloe, Michigan, Doug (Linda) Clegg of Lansing, Michigan. Daryl (Julie) Clegg of Pickford, Cindy (Darryl) Markstrom of Williamston, Michigan, Keith (Susie Walkiewicz) Clegg of Sault Ste. Marie, Michigan, Don Buhro of Sault Ste. Marie, and Jen (Josh) Dyer of Pickford; many grandchildren; several great-grandchildren; and one great-great-grandchild; brothers-in-law, Harris and Chuck McGill of Sault Ste. Marie; and many nieces, nephews and cousins. Clint is preceded in death by his parents, Clinton Sr and Byrdell “Birdie”; sisters, Joanne (John) Bezotte and Donna (Carroll) Goodrich; brother, Ronald Clegg; sister-in-law, Debbie McGill; and mother-in-law, Gerry McGill. A gathering in Clint’s memory will be held at Big D’s Dinner in Pickford, on Thursday, March 24, 2022, from 4 PM - 7 PM. Galer Funeral Homes & Cremation in Pickford, Michigan is serving the family. Condolences may be sent to the family at www.galerfuneralhomes.com.

Clinton William Clegg Jr., age 86, of Pickford, Michigan, died with his loving family by his side on March 21, 2022, at his home. He was born in Pickford on July 24, 1935, to Clinton William Sr. and Byrdell (Kerr) Clegg. Clint grew up in his... View Obituary & Service Information

The family of Clinton William Clegg Jr. created this Life Tributes page to make it easy to share your memories.

Send flowers to the Clegg family.