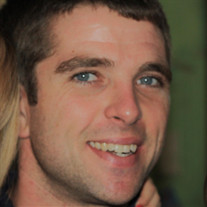 Corey Andrew Nye, age 40, of Pickford, Michigan, passed away in Cedarville, Michigan, on April 13, 2022. He was born in Petoskey, Michigan, on November 9, 1981, to parents Tim Nye and Patricia Brown. Corey grew up in Pickford and graduated from Pickford High School in 1999. He became certified in mechanics through the Sault Career Center and started working with Norris Contracting soon after. He then went on to work for Mertaugh Boat Works for fifteen years as well as Pickford Auto for a few years. His latest job was with Viking Boat Harbor in Cedarville where he got to enjoy working on a variety of boat projects. He met the mother of his children and started a family in 2006 when they welcomed Emma into the world and then Eli in 2011. Corey was a very sociable and lovable man and was a friend to everyone. He loved to work and was very dedicated to his trade. He would gladly accept side projects and was someone who enjoyed staying busy. He especially enjoyed boating and work on boats—but his greatest joy was being a father and raising his two children. Corey made many friends over the years and will be greatly missed. Corey is survived by his children, Emma and Eli Nye of Pickford; father, Tim Nye of Hessel, Michigan; grandmother, Norma Nye of Hessel; Olivia Huffman of Pickford, and many beloved aunts, uncles, nephews, nieces, cousins, and friends. Also surviving, mother, Patricia Brown of Cheboygan; and sisters, Michelle Gunyou of Sault Ste. Marie, Michigan, and Galadrial Pasqueal of Lake Orien, Michigan. Corey is preceded in death by his stepmother, Carol Nye and grandfather, Harold Nye. There will be no services at this time. Memorials may be given to Tim Nye to aide Corey’s children during this difficult time. Galer Funeral Homes & Cremation, of Pickford, Michigan, is serving the family. Condolences may be sent to the family at www.galerfuneralhomes.com.

Corey Andrew Nye, age 40, of Pickford, Michigan, passed away in Cedarville, Michigan, on April 13, 2022. He was born in Petoskey, Michigan, on November 9, 1981, to parents Tim Nye and Patricia Brown. Corey grew up in Pickford and graduated... View Obituary & Service Information

The family of Corey Andrew Nye created this Life Tributes page to make it easy to share your memories.

Send flowers to the Nye family.