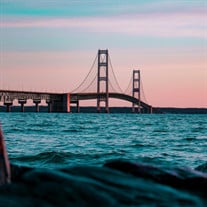 Craig Leroy Sanderson, age 71, Of Kincheloe, Michigan, passed away at MyMichigan Health Center in Sault Ste. Marie, Michigan, on February 1, 2022. He was born on March 8, 1950, in Pontiac, Michigan to parents Merlin “Sandy” Bernard and Donna Marie (Riley) Sanderson. Craig graduated from Pontiac High School and joined the Air Force after graduation. He served overseas, rising to the rank of Sergeant, before being honorably discharged in February 1973. He later moved to Las Vegas, Nevada, as well as around the state of Michigan in many places, including Pickford, Michigan. He settled in Kincheloe, Michigan, where he lived out his retirement until entering the Hearthside Assisted Living Facility in Sault Ste. Marie. Craig enjoyed Candy, Soda Pop, and a good cigarette. Craig is survived by his two children, Brian Sanderson and Kimberlyn Schottmuller; sister-in-law, Cynthia (Post) Sanderson; nephew, Mark McCutcheon. Craig is preceded in death by his parents, Sandy and Donna; brother, Jerry Sanderson; uncles, Russel and John Sanderson, Ronald and Keith Riley; and aunt, Audrey Sanderson Webb. Many thanks to the staff at Hearthside Assisted Living for the care provided to Craig over these last twelve years. A graveside service will be held in Spring 2022 at Oaklawn Chapel Gardens in Sault Ste. Marie to honor Craig’s memory. Galer Funeral Homes & Cremation in Pickford, Michigan is serving the family. Condolences may be sent to the family at www.galerfuneralhomes.com.

The family of Craig Leroy Sanderson created this Life Tributes page to make it easy to share your memories.

Send flowers to the Sanderson family.