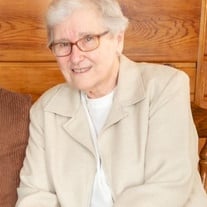 Dana Gay Goudreau, age 91, passed away on March 25, 2021 at her home in Trout Lake, Michigan. She was born on March 27, 1929 in Traverse City, Michigan, to Forest and Ina Mae (Haskin) Clark. Dana grew up in Garnet, Michigan and graduated from... View Obituary & Service Information

The family of Dana Gay Goudreau created this Life Tributes page to make it easy to share your memories.

Send flowers to the Goudreau family.