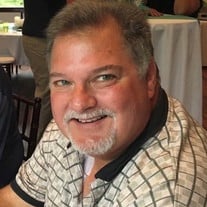 Daniel James "Danny" Mertaugh, age 59, of Cedarville, Michigan, died on December 6, 2020. He was born on April 10, 1961 to Eugene James "Jim" and Ella May "Elly" (Nelson) Mertaugh in Sault Ste. Marie, Michigan. Danny grew up in Hessel, Michigan. He was raised as an integral part of the family business, E. J. Mertaugh Boat Works, the country's first Chris-Craft dealer. Working alongside his grandfather, E. J. "Gene," his father Jim, and other family members, Danny developed fine skills and expertise in woodworking and mechanics. Danny attended Cedarville Schools and played hockey in the Sault Ste. Marie Junior League. After high school, he remained with the family business. When that business was sold, Danny continued to restore antique boats independently, while also driving for Cedarville Schools and serving as an EMT Ambulance Driver for Clark Township. Later, he joined his brother, Tommy, at Classic and Antique Boats, restoring and maintaining many of the area's prized, wooden boats to a high standard. Danny helped that business grow into one of the country's best in its field. After that business was sold, Danny continued to pursue his passion for restoring classic cars. Danny was a wealth of knowledge. He could figure out just about any problem with anything that moved: boats, cars, trucks, snowmobiles and others. Anything he could get his hands on. Because above all, Danny loved working with his hands. He loved the outdoors too, especially ice fishing and bird hunting. As a person, Danny was a very giving, kind soul. He helped people just do what needed to be done. His gentleness, caring, and smile will be much missed by his friends and family. Danny is survived by his wife, Judy; children, Megan (Trevor) Bouwens of Grand Ledge, Michigan, and Jaycee and Shelby of Cedarville, Michigan; grandchildren, Addison, Bexley, and Cylus; father, Eugene; siblings, Amy (Robert) Paczkowski of Cedarville, Erin (Jason) Brooks of Canton, Michigan; sisters-in-law, Jeanette Mark of Marquette, Michigan, and Cindy St. Clair of Traverse City, Michigan, and brother-in-law, Darrell St. Clair of Cheboygan, Michigan. Danny was preceded in death by his mother, Elly; brother, Tommy Mertaugh, and brothers-in-law, Mark Izzard, James Mark, and John Mark. Memorial Contributions may be sent to the Les Cheneaux Ambulance Auxiliary, P.O. Box 453, Hessel MI 49745.

The family of Daniel James Mertaugh created this Life Tributes page to make it easy to share your memories.

Send flowers to the Mertaugh family.