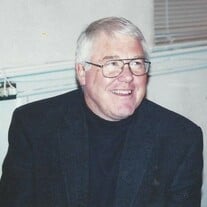 Darrel Forrest Ledy, age 82, of Drummond Island, Michigan, went to be with his heavenly Father, unexpectedly on Saturday, September 11th at his home on Drummond Island. He was born January 11, 1939, to the late Forrest Jones Ledy and the late Genevieve Mae Ledy (Payment) in Sault Ste. Marie, Michigan. Drummond Island was home during his early years; attending school, church, sports, fishing, hunting, and enjoying life. During high school, he excelled at all sports. He held a long-standing record of 48 points scored in a basketball game, but his proudest achievement was winning the 800-meter run at the UP finals, dispelling the common belief that he was slow. After high school, he attended Northern Michigan University and then Alma College, pursuing a teaching degree. While at Alma, he was a member of the Scots football team and the TKE fraternity, making friendships that lasted all his life. Darrel's first teaching position was in Alpena, where he met Sandra Evans, a fellow teacher, who became his wife and constant companion of 57 years. Shortly thereafter, they relocated to teach in the DeTour Area School System. During his 33 years at DeTour, he made an impact as teacher, coach, class advisor, and bus driver. After retiring from DeTour, he spent his time at the golf course, fishing, hunting, working on "the house," and catching any possible game his kids coached or his grandkids played. He was also an active member of the Drummond Island Lions Club and the Drummond Island Golf Club. In every meeting, his love of family, friends, life, sports, and faith were crystal clear. Think of him with a smile, as he did you. Your joy was his joy. Darrel is survived by his wife, Sandra (Evans); children, Heidi (David) Kanouse, Erica Ledy, Richard (Morri) Ledy, and Britta (Kirk) Astle; grandchildren, Tatum Ledy, Darrel Lee Anthon, Richard Ledy II, Jade (Bryan) Erspamer, Cullen Ledy, Sawyer Astle, Rhiar Kanouse, Terese Ledy, Gabriel Kanouse, Soren Astle, Jonas Kanouse, Avery Ledy, and Rowin Ledy; great-grandchildren, Huron Anthon, Reverie Anthon, Caroline Morrison, and Callahan Erspamer; beloved sister, Gail Ledy; sister-in-law, Mary Ledy (September 11, 2021); sister-in-law, Carol Coffey; brother-in-law, Ray Whiteman; and sister-in-law, Pamela Whiteman; uncle, Delbert "Sam" Ledy, aunt, Pansy Gore; and aunt, Betty Ledy; and many nieces and nephews. Darrel is preceded in death by his son, Forrest Scott Ledy; brother, Duane Ledy; brother-in-law, David Coffey; and nephew, Randy Scott Ledy Gochnour. Please join us celebrating his life on Wednesday, September 15th visiting from 3:30 - 6:30 pm at Galer Funeral Homes, Pickford, Michigan, and on Thursday, visiting at the Drummond Island Baptist Church from 10-11am and later at his funeral service at 11 am. Luncheon at the Drummond Island Town Hall to follow graveside service. **Please note: To avoid the ferry line, the family has arranged for a shuttle bus to run from the Drummond Island Ferry to the Baptist Church on Thursday for those who wish to attend the Visitation and Funeral Service on Drummond Island. The shuttle will be picking up riders from the 9:40 am departure from DeTour and will return them to the Drummond Island Ferry at the end of services. Memorial contributions may be made to DeTour Sports Boosters, 202 S. Division St., P.O. Box 429, DeTour Village, MI 49725 or Drummond Island Golf Club, 29901 E. Fairchild Lane, Drummond Island, MI 49726. Galer Funeral Homes & Cremation in Pickford, Michigan is serving the family. Condolences may be sent to the family at www.galerfuneralhomes.com.

Darrel Forrest Ledy, age 82, of Drummond Island, Michigan, went to be with his heavenly Father, unexpectedly on Saturday, September 11th at his home on Drummond Island. He was born January 11, 1939, to the late Forrest Jones Ledy and the late... View Obituary & Service Information

The family of Darrel Ledy created this Life Tributes page to make it easy to share your memories.

Send flowers to the Ledy family.