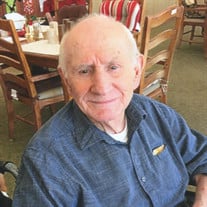 Darwin “Dar” Kauer passed away peacefully and went home to meet his heavenly father on Sunday, February 13, 2022, at War Memorial Hospital in Sault Ste. Marie. He was 89 years old. Darwin was born on August 15, 1932, in Cleveland, Ohio, the son of the late Henry and Lillian May (Danley) Kauer. Darwin was a 22-year veteran of the United States Air Force. He met and married his wife Betty in Tawas, Michigan on April 7, 1956, where he was stationed at the time. Upon retiring from the military, Dar pursued a career in life insurance, working for John Hancock and Mutual of Omaha for many years before semi retiring to work at a local sport shop. Dar enjoyed spending time fishing with his children when they were younger, as well as supporting them in their various sports activities. He was a huge football fan and enjoyed watching his favorite team the Cleveland Browns. One of Dar’s greatest passions was visiting long-term care and local nursing homes to bring hope and enjoyment to the residents. His desire to spread the gospel and lead others to Christ was very important to him. Dar is lovingly remembered by his children, David (Luanne) Kauer of Kincheloe, MI, Pamela (Jeffery) Donaldson of Acton, MA, Darcy (Nadine) Kauer of Vacaville, CA, Douglas (Ellen) Kauer of Woburn, MA, Darell Kauer of Sault Ste. Marie, Mark (Denise) Kauer of Maxbass, ND, Beth Eide of Kincheloe, Wendy (John) Kennedy of Kincheloe, and Wanda (Bruce) Osborn of Kinross; along with 15 grandchildren and 16 great-grandchildren. Dar was preceded in death by his loving wife of 49 years, Betty; his brother, Robert (Bud) Kauer; and sister, Florence Kauer. Visitation will be held on May 18, 2022, from 2:30 P.M. till 3:30 P.M. at Galer Funeral Homes & Cremation, 24549 S. M-129 in Pickford. The funeral Service will follow at 3:30 P.M. In lieu of flowers, the family requests that donations be made directly to the Gary Sinise Foundation at www.garysinisefoundation.org or Michael J. Fox Foundation at www.michaeljfox.org. Condolences may be sent to the family at www.galerfuneralhomes.com.

The family of Darwin Richard Kauer created this Life Tributes page to make it easy to share your memories.

Send flowers to the Kauer family.