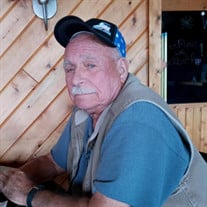 David Lee Henry, age 74, of Pickford, Michigan, died at Mid-Michigan Health System in West Branch on March 15, 2022. He was born in Ferndale, Michigan, on June 15, 1947, to Vaughan and Velma (Hill) Henry. David grew up in Madison Heights, where he attended Troy High School. He joined the United States Marines Corps and served for over twenty years. He was stationed in several different countries, including Okinawa, Japan. He was proud to be in charge of security at the American Embassy in Rabat, Morocco while serving in the USMC. He also served several years as a drill instructor. David retired from the military in 1988 and began working for his father and eventually bought Northern Forklift Repair in St. Helen, Michigan. He ran the business until 2002, when he sold and moved to Rudyard, Michigan. He continued to work on trucks around the Eastern Upper Peninsula until 2008, when he retired. He met Judy Stump in December 2007 and they married on September 6, 2011. David was a member of the American Legion Post in St. Helen. David enjoyed gardening, boating, spending time with his wife. Together, David and Judy remodeled their homes and enjoyed life. David is survived by his wife, Judy Henry; daughter, Tracey Schwalbach of Swartz Creek, Michigan; brothers-in-law, John (Janet) Stump of Onaway, Michigan, and Jack (Kity) Stump of San Diego, California; sister-in-law, Janet Alramdhan; grandchildren, Jonathan and Lucas Schwalbach; and many beloved nieces and nephews. David is preceded in death by his parents, Vaughan Henry and Velma (Henry) Irwin; and brothers-in-law, James and Jerry Stump. There will be a Celebration of life at Huck’s Pub & Grill in Rudyard, April 2nd, 2022, at 3:00 PM. Galer Funeral Homes & Cremation in Pickford, Michigan is serving the family. Condolences may be sent to the family at www.galerfuneralhomes.com.

The family of David Lee Henry created this Life Tributes page to make it easy to share your memories.

Send flowers to the Henry family.