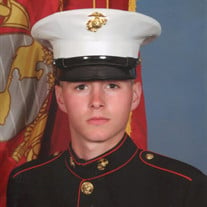 David James Shields lll, age 33 of Sault Ste. Marie, Michigan passed away on February 27, 2022. On July 19, 1988, David was born in Phoenix, Arizona to parents Robert “Rob” James Shields and Jacqueline “Jackie” Robin Perron. David grew up in Phoenix, Arizona; Orlando, Florida; and Sault Ste. Marie, Michigan where he graduated with the class of 2007 from Sault Area High School. After graduation, he made his family proud by joining the United States Marine Corps, which included a tour of duty to Iraq “Operation Iraqi Freedom” and a Peacekeeping Mission in South America. David became a father in 2010 to James Michael Shields who was the light of his life. After returning home from the Marine Corp., he began working at Mountain Stone constructing breakwalls and then construction with the Sault Tribe. Most recently, he had been working for Nomad Construction side-by-side with his father Rob and his brother Michael. David was also a member of the Sault Ste. Marie Tribe of Chippewa Indians. David was a fun-loving guy who enjoyed socializing and always had a great story to share. He had an incredible smile that stole hearts and brought comfort around the world. Whenever David was around you were likely to be laughing and sure to be included. David always made everyone feel important. Any free time David had was spent at Sarna Obuz “Camp”. David enjoyed spending time outdoors: snowshoeing, hunting, fishing and having HUGE bonfires. He enjoyed four wheeling, boating, snowmobiling and shooting skeet with his son, family and friends. David was someone who would go out of his way for others, always willing to help in any situation, caring for everyone around him. David is survived by his son, James Michael Shields; father, Rob (Andrea Kempf) Shields of Sault Ste. Marie; mother, Jackie (Rick) Perron of Orlando, Florida; brothers, Robert "Robbie" (Amy) Shields of Sault Ste. Marie, Michael (Destiny McKechnie) Johanson of Sault Ste. Marie, and Ricky “Kishka” Perron of Orlando, Florida; sisters; Lindsay Perron of Orlando, Florida and Shelby (CJ) Wilkins of Sault Ste. Marie; grandmother, Mildred “Gran” Krzycki of Sault Ste. Marie, niece, Kylee Shields; nephew, Jaxten Wilkins as well as many other beloved cousins including his good friends and cousins Dorthy and Steven Wilson. There are so many friends and family members near and far who love David that it would be impossible to list them all. David leaves behind many who will miss him including his dogs Chevy Rhonda Shields ll and Uncle Fester. David was preceded in death by his grandparents; John Krzycki, David Shields, and Don and Mary (Shields) Theut. A Celebration of Life for David will take place on Sunday, March 13, 2022 at the Sault Tribe Niigaanagiizhik Ceremonial and Cultural Building, 11 Ice Circle Chi Mukwa, Sault Ste. Marie, MI. With visitation from 12:30 pm to 2:30 pm and the service beginning at 2:30 pm with a luncheon to follow.

The family of David James Shields III created this Life Tributes page to make it easy to share your memories.

Send flowers to the Shields family.