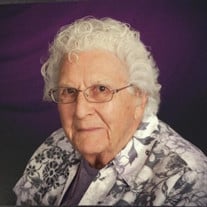 Della June Fountain, age 93, of Pickford, Michigan, died Saturday, September 19, 2020, in Sault Ste. Marie, Michigan. She was born June 12, 1927, in Pickford to Fredrick Richard Hancock and Edith (Roberts) Hancock. Della grew up in Pickford with her twelve siblings. She married Raymond James Fountain on September 29, 1945. They lived on a farm in Pickford where they worked together building their home, operated their farm and raised two children. They enjoyed nearly 60 years of marriage when Ray died in 2005. Della also worked for a time at Our Own Bakery, and as a nurse's aide in the operating room at the hospital. She was registered with American Red Cross in first aid for the injured. She was a member of the Pickford United Methodist Church and the Michigan Farm Bureau. Della loved working alongside her husband, both in the barn with the animals and in the fields harvesting hay and other crops. They also enjoyed gardening, camping, and hunting deer together. They were each other's best friend but things would get "interesting" whenever Ray would say "Now Ma". They were proud of the designation of their farm as a "Centennial Farm" for being owned and farmed by the same family for over 100 years. Their children and grandchildren made countless memories working on the farm, camping (especially at the Escanaba and Kinross fairs and at Trout Lake), sucker fishing, hunting, snowmobiling, and enjoying traditional Sunday family dinners. Della is survived by daughter-in-law, Kathryn Fountain of Pickford; son-in-law, Ernest Bruning of Cedarville; grandchildren, Drew (Holly) Bruning of Pickford, Elli (Fred) DeVuono of Sault Ste. Marie, Randy (Tricia) Fountain of Ludington, Michigan, and Ryan (Kerry) Fountain of Alma, MIchigan; great grandchildren and families, Dakota (Amanda) Swinton expecting baby Eli, Tyler (Emily) Fountain and baby Isabella, Austin Bruning and children Carson and Jaxson, Shelby Lasley, Zachery Lasley, Emma Fountain, Luke Fountain, Saige Bruning, and Wyatt Fountain. Della was preceded in death by her husband, Raymond; son, Richard James Fountain Sr.; daughter, Charlotte Bruning; grandsons, Dean Bruning and Richard James Fountain Jr.; and all of her siblings, Hazel Nettleton, Carlile Hancock, Josephine Steele, Effie Raynard, Eva Hanchera, Doris McClain, John Hancock, Melba Little, Stanley Hancock, Ruby Earl, Wilna Hancock, and Ethleen Hancock. Services will be held Friday, September 25, at R. Galer Funeral Home, 24549 S M-129 in Pickford. Visitation will be held from 11:00 AM until 2:00 PM followed by the funeral service at 2:00 PM. Burial will be in Fairview Cemetery in Pickford Township. In lieu of flowers memorial contributions may be made to the Pickford Public Schools Victory Bell at P.O. Box 278, Pickford, MI 49774. Condolences may be sent to the family at www.rgalerfuneralhome.com. Della touched many people’s lives but her family is also thankful for the many people who have touched Della’s life, especially her daughter-in-law, Kathy for being next door and all she did for Della, her family who were always available to lend a helping hand as she lived alone on the farm, her neighbors for keeping an eye on her, friends who would stop by to keep her company, her hospice friends who helped her through the really tough times after Ray died, and Drew and Holly for being there for her during this last year.

The family of Della June Fountain created this Life Tributes page to make it easy to share your memories.

Send flowers to the Fountain family.