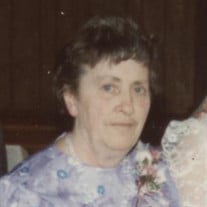 Dolores Mae Ault, age 90, of Drummond Island, Michigan, passed away on October 25, 2021, at the Pennington Home in Pickford, Michigan. She was born on November 11, 1930, in Cleveland, Ohio, the daughter of Harold and Clara (Pennington) Guy. Dolores grew up in Cleveland and worked in the business department of Sherman Williams. She met John William Ault on his birthday, New Year's Eve and they were married six weeks later on February 15, 1958. In 1973, Dolores and John moved the family to Drummond Island. Dolores worked a number of jobs such as a waitress and secretary for a number of establishments. She loved her most important job, which was taking care of her family and her animals. She always had full, homemade meals including desserts. Dolores loved her dogs, cats, and the many other animals the family had over the years. She never hesitated to take in strays. Dolores enjoyed her flower gardens and indoor plants. Knitting and crocheting were her favorite hobbies. She could make anything with her crochet hook and knitting needles. Dolores was active in the Drummond Island Arts and Crafts Club as a crafter, as well as serving as their secretary for a number of years. Dolores is survived by one son, Robert (Tammy) Ault of Drummond Island; one daughter, Caroline Ault-Keller, of Pickford, Michigan; and one granddaughter, Katie Marie Keller of Pickford. Dolores was preceded in death by her two sisters, Betty Burgess and Shirley Budway; her husband of 63 years, John; and her parents. Dolores will be laid to rest at the Drummond Island Cemetery with a graveside service taking place on November 20, 2021, at 2:00 PM. The family would like to extend their thanks to the Pennington Home for the wonderful care they provided to Dolores. In lieu of flowers, a donation may be made to the Pennington Home SHSS, 1501 6th Ave. Sault Ste. Marie, MI 49783.

Dolores Mae Ault, age 90, of Drummond Island, Michigan, passed away on October 25, 2021, at the Pennington Home in Pickford, Michigan. She was born on November 11, 1930, in Cleveland, Ohio, the daughter of Harold and Clara (Pennington) Guy.... View Obituary & Service Information

The family of Delores Mae Ault created this Life Tributes page to make it easy to share your memories.

Send flowers to the Ault family.