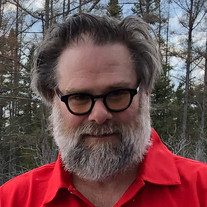 Dennis Brain Smith of St. Ignace, Michigan, passed away unexpectedly at his home on April 10, 2022, at the age of 55. He was born in Kalamazoo, Michigan, on August 31, 1966, to Norman and Nancy (Gustafson) Smith. Dennis grew up in Portage, Michigan, with his parents, sister Denise, and his twin brother David. He attended Portage Central High School and graduated in 1984. He went on to attend Western Michigan University, earning a dual bachelor's degree in Fine Arts and Philosophy, before going on to obtain his Master of Architecture degree from the University of Michigan. He did some studying abroad which gave him the opportunity to visit parts of Europe and Prague in the Czech Republic. Dennis met and fell in love with Anne Yaroch while in college and they married in 1995. They resided in Ann Arbor and welcomed the birth of the love of their lives, Theo, in 2002. Even though they were separated at the time of Dennis’s death, they remained connected to co-parent Theo. After graduating, Dennis worked for an architecture firm for a short time before finding a passion for technology and becoming a web developer. It was a field that allowed Dennis to follow his artistic passions. He moved to St. Ignace with his son, Theodore, in early 2017 to be closer to his family and enjoy life in the Upper Peninsula. Dennis was a very artistic individual and had a knack for graphic design. He designed and ran his own website, Lead Holders, where he was able to connect with people all over the globe that collected architectural drafting pencils. As a result of the connections he made through his website, he participated in the Variety Bash road rally in Australia. He had an extensive collection that he was proud of and had even been interviewed by Architect Magazine. He was also a Rock Hound and would walk the beaches of Michigan hunting for rocks and fossils. Dennis was a very unique and driven individual. While his time was too short, he lived a rich life and will be greatly missed by everyone who had the pleasure of knowing him. Dennis is survived by his son, Theodore Smith of Kalamazoo, wife, Ann Yaroch of Kalamazoo, parents, Norman Lowell Smith and Nancy Jane (Gustafson) Smith of St. Ignace; brother, David (Dawn) Smith of Portage, Michigan; niece, Miette Smith and nephew, Quinlan Smith, and many beloved aunts, uncles, and cousins. Dennis is preceded in death by his sister, Denise Smith. The Memorial Service will be Saturday, May 7, at 11AM at St. Anthony of Padua Catholic Church in Mackinaw City, Michigan, with Sister Chris Herald officiating. You are invited to join Dennis's immediate family in the Parish Life Center for a luncheon immediately following the service. Please stay and continue to share your memories of Dennis with each other. A private graveside service will be held later in Brevort Cemetery. Memorial donations in Dennis' memory may be left to the family to aide with funeral expenses. Galer Funeral Homes & Cremation, of Pickford, Michigan, is assisting with arrangements for the Dennis Smith family. Condolences may be sent to the family at www.galerfuneralhomes.com.

Dennis Brain Smith of St. Ignace, Michigan, passed away unexpectedly at his home on April 10, 2022, at the age of 55. He was born in Kalamazoo, Michigan, on August 31, 1966, to Norman and Nancy (Gustafson) Smith. Dennis grew up in Portage,... View Obituary & Service Information

The family of Dennis Brian Smith created this Life Tributes page to make it easy to share your memories.

Send flowers to the Smith family.