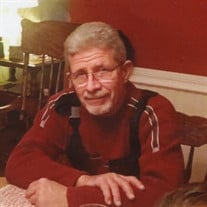 Donald “Don” Murray Hudak, age 64, passed away peacefully on March 7, 2022, at his home in DeTour Village, Michigan, surrounded by his family after a longtime battle with cancer. He was born on May 23, 1957, in Sault Ste. Marie, Michigan to parents Ronald “Joe” and Ruth Ann (Fountain) Hudak. Growing up with a father in the Coast Guard, Don spent this childhood all over the United States. He graduated in 1975 from Kodiak High School in Alaska. From there, Don went on to work for Tenneco Oil Company in Louisiana. He transported personnel and supplies to oil rigs in the Gulf of Mexico while earning his Captain license before moving to DeTour. He worked for a brief time as a captain for the local ferry while attending the Michigan Department of Corrections academy. Upon completing his training, Don went on to work as a Correctional Officer at Kinross Correctional Facility (KCF) and raising his sons until his retirement in 2013. He met his wife, Deborah “Debbie” Marie (Adamo) Hudak in 2001 and spent twenty-one wonderful years together. Don was a proud member of the Sault Tribe of Chippewa Indians. Don was someone who always kept himself busy; he could always find some work around the house that needed to be done or would offer his time to help his friends and family with anything they needed. He enjoyed motorcycle riding and loved animals. He was known as the “animal whisperer”. He was an artist and enjoyed pen and ink drawings of local sceneries. Don made many friends over the years and will be greatly missed by all who had the pleasure of knowing him. Don is survived by his wife, Debbie of DeTour; parents, Ronald and Ruth Ann of DeTour; sons, Andon (Melissa) Hudak of New Jersey, Blaine (Alisha) Hudak of Florida and Dustin (Nicole) Cruz of California; grandchildren, Austin, Ava, Andon, Minka, Ella & Jaxon; as well as many other beloved members of his family. Don is preceded in death by his grandparents, Louis and Leah Fountain; Clarence and Margaret Hudak, and his son, Donald “DJ” Hudak. A Memorial Gathering will be held on May 28, 2022, at 11:00 AM with a luncheon to follow at the DeTour Union Presbyterian Church with Pastor Dave Henderson officing. Don will be buried at the Hudak family plot in Maple Grove Cemetery with his son, DJ. Galer Funeral Homes & Cremation in Pickford, Michigan, is serving the family. Condolences may be sent to the family at www.galerfuneralhomes.com.

The family of Donald "Don" Murray Hudak created this Life Tributes page to make it easy to share your memories.