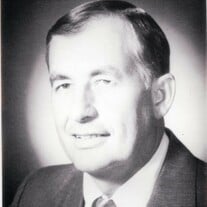 Donald Henderson, 86, of Sault Ste. Marie, MI passed away Wednesday October 13, 2021 at War Memorial Hospital. He was born August 5, 1935 in Sault Ste. Marie, MI to William and Lillian (Morrison) Henderson. Donald grew up in Sault Ste. Marie attending St. Mary's Elementary, Loretto High School, and Michigan Tech. He worked for Hartford Insurance Company at many locations before retiring in San Francisco as General Manager. He was President and CEO of Capital Insurance Group for six years. He then became President and CEO of Citation Insurance Group. He semi-retired and performed insurance consulting from 1997 to present. Donald was on St. Mary's School Council, Habitat for Humanity Board, Chairman of International Harvester Collectors Trust, and Chairman of the Board for NAC Insurance Company. Donald was a high school basketball player and played youth hockey until his college days. He loved to watch professional hockey and living in California, the San Jose Sharks were his team. His love was his 1947 W4 McCormick-Deering tractor he inherited from the Wilson farm. He was involved with tractor pulling for many years and won 1st Place in 1998 in a California tractor pull. His latest tractor pull was at the Chippewa County Fair in September along with his visiting son. Donald was an avid reader and loved history. Donald is survived by his wife Dorothy, five children, sister Joan, six grandchildren, and six great grandchildren. Donald was preceded in death by his parents, first wife, Constance (Jacques) Henderson and brother Dale. Visitation for Donald will be Thursday October 21, 2021 from 11:00am until 1:00pm in the Mary Room at St. Mary's Catholic Church. Mass of Christian Burial will be Thursday October 21, 2021 at 1:00pm at St. Mary's Catholic Church, 337 Maple St, Sault Ste. Marie, MI 49783, with Father Nicholas Thompson officiating. His final resting place will be Queen of Heaven Cemetery in Lafayette, California. The family requests donations be made in Donald's name to St. Mary's Catholic Elementary School, 360 Maple St, Sault Ste. Marie, MI 49783. Clark Hovie Galer Funeral Home assisted the family with arrangements.

The family of Donald Henderson created this Life Tributes page to make it easy to share your memories.

Send flowers to the Henderson family.