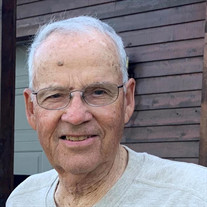 Donald "Don" Ray Kuhns, age 82, of Goetzville, Michigan, passed away at Ball Hospice House in Sault Ste. Marie, Michigan, on April 6, 2022. He was born in Muncie, Indiana, on March 18, 1940, to Leslie Frank and Mildred Mae (Thornton) Kuhns. Don grew up in Muncie and graduated in 1958 from Muncie Central High School. He joined the United States Army and was stationed in Seoul, South Korea from 1961 until 1962. When Don returned to the states, he met Sandra Kay Stauffer, and they married on July 24, 1964. They had one daughter, Stacy, who was their pride and joy. Don worked for General Motors as an electrician at the Delco battery plant in Muncie. After his retirement, Don and Sandy moved to Raber, Michigan, to be closer to Stacy and their grandchildren. Don was a member of the Masonic Lodge, Farmland Conservation Club, and Raber Area Sportsman's Club. Don enjoyed fishing, hunting, golfing, and training hunting dogs. Brittany Spaniels were his preferred K9 hunting partners, but he had over 30 different dogs of varying breeds. He particularly enjoyed the challenge of training bird dogs. Don was also an avid bowler. He had grown up working in bowling alleys and always worked for that elusive 300 game-but greater than any perfect game; the bowling alley is where he met Sandy, and he considered building his family his greatest accomplishment. He enjoyed spending time with family most of all, especially watching his grandkids' sports. Don loved being a Papa to his grandchildren. He leaves behind many fond memories in the hearts of family and friends who will miss him dearly. Don is survived by his wife, Sandra Kay Kuhns of Goetzville; daughter, Stacy Wilkie (Ken) of Goetzville; grandchildren Madison and Jaxon; sister, Ellen Graves of Muncie; brother, Gail Kuhns of Muncie, as well as many other loved ones. Don is preceded in death by his parents, Leslie Kuhns and Mildred (Kuhns) Lake; step-father, John Lake; in-laws, Hubert and Mildred Stauffer; sister, Lesta Etchison; brothers-in-law, Robert Graves and Earl Etchison; sister-in-law, Marilyn Kuhns; and nephew, Bret Etchison. No services will be held at this time. Memorial contributions may be made to Hospice of the EUP, 308 W 12th Ave., Sault Ste. Marie, Michigan, 49783. Galer Funeral Homes & Cremation, of Pickford, Michigan, is serving the family. Condolences may be sent to the family at www.galerfuneralhomes.com

The family of Donald Ray Kuhns created this Life Tributes page to make it easy to share your memories.

Send flowers to the Kuhns family.