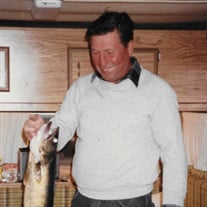 Donald C. Theut, age 90, of Sault Ste. Marie, Michigan, passed away on Saturday, December 4, 2021, in Traverse City, Michigan. He was born September 22, 1931, in Utica, Michigan to Arthur and Margaret Theut. Don graduated from High School in 1949 and was a Golden Gloves Champion the same year. He married Dorothy Bearss and their union gave them three children. Dorothy preceded him in death in 1968. In 1975, he met Mary (LaPlaunt) Shields. They would marry eight years later on September 3, 1983. Together they loved to travel, go on fishing trips, play cribbage, go camping, or be on their boat “Storm Along”. Mary preceded him in death in 1992. Don was a member of Brick Layers Union # 6 for over 50 years. His craftsmanship is in numerous buildings throughout Sault Ste. Marie and surrounding areas. He was a man of strong catholic faith, never having a bad word to say about anyone. He believed in respect, responsibility and hard work. He loved the outdoors. In the summer you would find him in his beautiful garden or watching the birds at one of his many feeders. Come fall, he would begin prepping for deer season at his camp in Cedarville where he shot many deer over the years. Winter would arrive and he headed for the ice to catch fish; sometimes spearing on the upper river for whitefish or jigging on the Munouscong for perch and walleye. Wherever he was, you could be sure he had his forever infamous “Beer and a Bump” for himself and anyone willing to do one with him. You were only a stranger until introductions were made. After that you had a friend. He will be forever missed by all who loved him. Don is survived by his children, Debbie (Norman) Pine and Daniel Theut; grandchildren, Sheila Kibble, Dorothy Mayne, Shawn Wilds, Nicole Oneski, Alicia Seymour, Kaylea Theut, Jeremy Theut, Alicia Hodges, Kristy Cameron, Tammy Nolan, Dorthy Wilson, Richard Shields, Rob Shields, David Shields, Michael Johanson, Shelby Wilkins, Danielle Petingalo, Matthew Petingalo and Shawn Tobias; as well as numerous great-grandchildren and great-great grandchildren; sister, Sally Strausborger; stepchildren, Rick (Nancy) Shields, Rob (Andrea Kempf) Shields, and Michelle (Bryan Thompson) Tobias; his beloved dog, Prancer; and close friends Ed Baril and Fred Alexander who’s friendship his family is forever grateful for. Don was preceded in death by his brother, Robert; sister Jeaneatte; oldest son, Donald; granddaughters, Kelsie Theut and Amanda Talentino; grandson Christopher Talentino; and son-in-law John Tobias Jr. Services will be held at St. Joseph’s Catholic Church in Sault Ste. Marie on December 13, 2021, with visitation from 12:00 Noon to 2:00 PM with the service to follow. A Luncheon to follow services at the American Legion hosted by his children and their families. Clark Hovie Galer Funeral Home & Cremation in Sault Ste. Marie, Michigan is serving the family. Condolences may be sent to the family at www.galerfuneralhomes.com.

The family of Donald C. Theut created this Life Tributes page to make it easy to share your memories.

Send flowers to the Theut family.