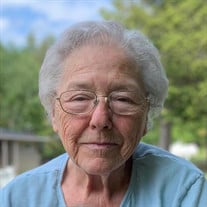 Donna Mae Bailey, age 86, of Drummond Island, Michigan, passed away on September 7, 2020. She was born March 9, 1934 in Alpena, Michigan, daughter of Russell and Olive Socia. Donna was raised on Drummond Island with two brothers and four sisters. She has been a lifelong resident of Drummond Island since. Donna was married to Earl A. Bailey on Sep-tember 23, 1950 and they have been married for 70 years. Together they had three sons, Louis, Russell, and Ronald Bailey. Donna’s main priorities were the love and care for her family and her love for Drummond Island. She particularly loved cooking big meals for family and is also noted for the many dishes she provided to numerous community gatherings over the years. Donna was em-ployed at Sune’s Grocery Store for 45 years. Donna was a member of the Drummond Lutheran Church and was involved in making hundreds of quilts which were donated to various charities. She was also a member of the Drummond Island Homemakers group for many years. She will live on in the hearts of her family and those who knew and interacted with her. She will truly be missed but not for-gotten. Donna is survived by her husband, Earl Bailey; son, Ronald (Mary) Bailey of Drummond Island; grandchildren, Miranda of Gaylord, Michigan, Marita of Sitka, Alaska, Mark of Jackson, Michigan, Andrea of Muskegon, Michigan, Clifford of Kinross, Michigan, and Aa-ron of Corpus Christi, Texas; and eleven great-grandchildren. Donna was preceded in death by her parents and sons, Louis and Russel Bailey. A Memorial Service will be held Saturday, September 19 at 11:00 AM at the Drummond Island Lutheran Church.

The family of Donna Mae Bailey created this Life Tributes page to make it easy to share your memories.