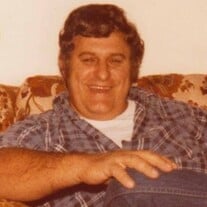 On the 25th day of August 2021 Edmund Louis Fields peacefully passed into eternity and into the loving arms of His Lord and Savior Jesus Christ. He leaves behind his Beloved Wife of 55 years Jacqueline Patricia (Madden) Fields Daughters Tracy... View Obituary & Service Information

The family of Edmund Louis Fields created this Life Tributes page to make it easy to share your memories.

On the 25th day of August 2021 Edmund Louis Fields peacefully...

Send flowers to the Fields family.