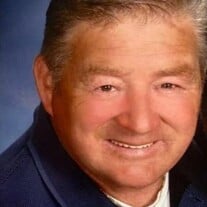 Edward James Lothrop, Sr. of Brimley, MI passed away on November 26, 2021 at the age of 76. He was born on June 19, 1945 in Brandon, the providence of Manitoba, Canada to the late William and Mary Lothrop. He worked at the Algoma Steel in Canada until he retired after 25 years of service. Then he and his love moved to Bay Mills where they grew old together and celebrated 55 beloved years of marriage. He loved to play bingo, ride down the road in his "Buggy", collect pop cans, work outside in his shed, and always looked to find a good trade or bargain. You would see him with a backwards "NativePride" hat and a big smile after he took any opportunity to tease. He married Bernadette Lothrop (LeBlanc) the love of his life on June 18, 1966. Together, they had four children: Edward Jr. (Joyce), Albert (Angel), Nicole, and Selina. They have 12 grandchildren: Tara (Allan), Ashley (Darick), Alyssa (Timothy), Page, Matthew (Kourtney), Aaron, Daniel, Megan, Trevor (Maria), Mystique, Quinten and Alli; 19 great grandchildren: Trey, Chendra, Jayden, Michael, Calie, Kade, Owen, Alex, Diem, Emma, Brynn, Stella, Nora, Maryea, Landon, Lily, Carter, Gianni, and Timothy Ill. His surviving 15 brothers and sisters are: Darlene, Ada Mae (James), Patricia, Geraldine, Mildred (Clarence), Barbara (Kenneth), Steven, Mary (Ken), Susan, Donna (Earle), William and Judy (Roni). His in-laws: Albert (Joann), Eileen, Debra, Corrine, Anthony (Dawn), Ruby (Sam), Jacques (Gloria), and Evelyene (Joe). He also has many relatives on both sides of the river. He was preceded in death by his Parents, Brothers: Donald, Robert and Michael, Sister Sharon, and In-laws Albert & Amelia LeBlanc, Daniel, Pierre, Raymond Marcel, and Soloma. "Eddie, Dad, Papa" will be greatly missed by all his loved ones. Services will be held at the Armella Parker Senior Center in Bay Mills, MI. The viewing will be on Monday, November 29th at 5:00p.m. Mass will be on Tuesday, November 30th at 2:00 p.m. with a luncheon following for family and friends. The family asks that everyone in attendance follows the current indoor mask mandate for Bay Mills Indian Community.

Edward James Lothrop, Sr. of Brimley, MI passed away on November 26, 2021 at the age of 76. He was born on June 19, 1945 in Brandon, the providence of Manitoba, Canada to the late William and Mary Lothrop. He worked at the Algoma Steel in Canada... View Obituary & Service Information

The family of Edward James Lothrop, Sr. created this Life Tributes page to make it easy to share your memories.

Send flowers to the Lothrop family.