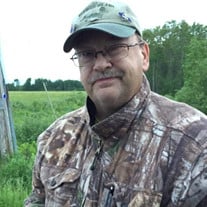 Edward “Ed” Franklin Miller, Jr., age 62, of Neebish Island, Michigan, passed away peacefully surrounded by his family on January 14, 2022, at McLaren Northern Michigan Hospital in Petoskey, Michigan. He was born in Marion, Ohio, on November 8, 1959, to parents Edward Franklin Miller, Sr. and Frances (Foster) Phelps. Ed moved to Neebish Island when he was six months old and then to Sault Ste. Marie, Michigan, when he was ten. He was a 1978 graduate of Sault Area High School. He also attended the Sault Area Career Center, where he obtained several vocational certificates. Ed then went on to attend Lake Superior State University where he met his wife, Lori Anne (Timoszyk) Miller. They married at Greenfield Village, Dearborn, Michigan, on January 7, 1984, and later moved to Newberry, Michigan, where he worked for many years at Lynn Auto Parts. Ed later worked as a deckhand on the Neebish Island Ferry. He retired in 2016. Ed was a member of the Neebish Island Historical Society, a volunteer for the Neebish Island Fire Department and a member of the Neebish Island Improvement Association. He was also a member of Ducks Unlimited and the Audubon Society. Ed was a former Webelos leader and assisted with the Boy Scouts in Newberry. Ed was honored to be a volunteer guardian to a WWII Veteran from Sugar Island for the Upper Peninsula Honor Flight’s trip to Washington, D.C. in 2016. Ed was a sociable and considerate man. He and Lori were licensed foster parents to eight boys. Ed loved his family and friends. Ed loved teaching children how to rock hunt, appreciate nature, enjoy the outdoors, fish and boat. He was always willing to help anyone in need and was a very kind and generous person. He loved his tractor, taking every opportunity to use his tractor to help others. He enjoyed tractors, motorcycles, boating, four-wheeling and fishing, (especially magnet fishing with his grandsons). Ed loved all animals - especially birds, raccoons, dogs, and turtles (Oh, my!). He enjoyed spending time outdoors and feeding the deer - his “ladies.” His love for all animals earned him the title of the local “Animal Whisperer.” Ed considered himself to be Smokey Bear’s #1 fan. Ed was everything Neebish Island. Ed is survived by his wife Lori Anne Miller; sons, Kenneth (Charlene) Miller of Newberry, Michigan, and Matthew Sharp of Traverse City, Michigan; grandsons, Kenyon, Konner, Kellan, and Kason; brother, Ronald Phelps of Mobile, Alabama; sisters, Patricia Stevens of Sault Ste. Marie and Bonnie (Simon) Langner of Neebish Island; foster brother, Russ (Lynn) Allen of Greenville, Wisconsin; and sisters-in-law, Evelyn Phelps of Alabama, Barbara (Jim) Wachowski of Tucson, Arizona, and Camille (Gene) Short of Sahuarita, Arizona; and many special nieces and nephews. Ed was preceded in death by his parents, Edward Franklin Miller and Frances (Foster) Phelps; foster parents, Drs. Steve and Margaret Malmberg; brother, Robert Phelps; sister, Debbie Miller; brother-in-law, Ronald Stevens, and son, Sean Sharp. Services will be held on Saturday, June 4th at St. James Episcopal Church in Sault Ste. Marie, Michigan. Interment will follow at the Catholic Cemetery on Neebish Island, Michigan. In lieu of flowers, donations may be made to the Neebish Island Historical Society, 17592 South Simonsen Road, Barbeau, Michigan 49710. Galer Funeral Homes & Cremation in Pickford, Michigan, is serving the family. Condolences may be sent to the family at www.galerfuneralhomes.com.

The family of Edward Franklin "Ed" Miller created this Life Tributes page to make it easy to share your memories.