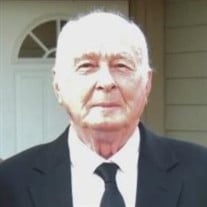 Elmer Eino Jarvie, 92, of Mackinaw City, Michigan, passed away on May 8, 2022, in Mackinaw City. He was born on May 18, 1929, to Eino and Goldie (Griswold) Jarvi in Rudyard, Michigan. Elmer enjoyed growing up on the family farm and graduated from Rudyard High School in 1948. He earned his Bachelor of Science degree from Michigan State University where he met the love of his life, Junia Carr. They were married in Texas on June 18, 1953, before he was deployed to serve in the Korean War. Upon his return, they moved to Nashville, Michigan, where they raised their family. In retirement, he loved spending summers at their cottage on Long Lake and winters in Gulf Shores, Alabama. Elmer was a true jack of all trades…teacher, master craftsman, farmer, and postmaster. He was passionate about his many projects and a truly gifted carpenter. His support of family, community, and church was unmatched and appreciated by many. Elmer is survived by his wife, Junia; children, Mark (Kathy) Jarvie, Joy (Ted Alex) Redmond, and Joseph (Julie) Jarvie; six grandchildren; and five great grandchildren. In addition, he is survived by siblings, Delbert Jarvie, Ted (Judy) Jarvie, Gale Jarvi, Sally Vannettan, and Donna Toft. Elmer was preceded in death by his parents, Eino and Goldie Jarvi, as well as his siblings, Dareld Jarvie, Earl Jarvi, Art Jarvie, Faye Elsholz, Arlene Burelli, and Mitzi Thimmes. A Celebration of Life gathering will be held Saturday, June 4, at 1:00 PM, at the Vermontville Congregational Church, 110 S. Main Street, Vermontville, MI 49096. Final resting place will be Fairview Cemetery in Dansville, Michigan. Memorial donations may be made to the Maple Valley Memorial Scholarship Foundation in the name of the “Elmer & Junia Jarvie Family” scholarship. Donations may be made online at barrycf.org/funds/maple-valley-memorial-scholarship-foundation-fund/ or mailed to MVMSF, PO Box 715, Nashville, MI 49073.

Elmer Eino Jarvie, 92, of Mackinaw City, Michigan, passed away on May 8, 2022, in Mackinaw City. He was born on May 18, 1929, to Eino and Goldie (Griswold) Jarvi in Rudyard, Michigan. Elmer enjoyed growing up on the family farm and graduated... View Obituary & Service Information

The family of Elmer Eino Jarvie created this Life Tributes page to make it easy to share your memories.