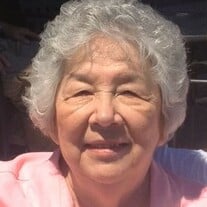 Elsie Catherine Turley, 87, of West Palm Beach, Florida passed away Friday December 31, 2021 in West Palm Beach, Florida of natural causes. She was born April 24, 1934 on Manitoulin Island, Canada to Joseph and Julia Mejaki and was the youngest of six children. She later moved to Sault Ste. Marie, MI where she met and married Herbert C. Turley. They were married 42 years until Herb's death in 1997. Elsie was a longtime resident of Sault Ste. Marie owning and establishing many businesses with her husband from the late 1950's through the late 1980's. The businesses included Turley's Lockview Restaurant, The Ojibway Hotel, The Tiki House of Gifts, and the Basket Village all located on Portage Avenue. She was also a member of the Gazelles Lodge #558, an active member and golfer at the Sault Country Club, bowled in the local bowling league and played Bridge for many years. Elsie did volunteer work for tax preparers, school reading programs, and church events and greatly enjoyed her family, traveling, cooking, social activities, trying new restaurants, concerts, and movies. She originally wintered in Boca Raton, FL and then later in Ft. Myers, FL., San Diego, CA and West Palm Beach, FL with her family. Elsie was much loved by her family and friends and will be greatly missed. She was the beloved matriarch of a large family including four daughters, Linda (Robert) Edwards, Cindy Brandon, Lorie Vinci, and Candy (Doug) Harvey, eight grandchildren and four great grandchildren and will be fondly remembered by several cousins, nephews, nieces, and in-laws. Mass of Christian burial will be held later in the spring at St. Mary's Catholic Church in Sault Ste. Marie, MI with internment at Riverside Cemetery. In lieu of flowers the family request donations be made in Elsie's name to The Salvation Army of Sault Ste. Marie, MI 132 W. Spruce St, Sault Ste. Marie, MI 49783, or call 906-632-6521 to also donate. Clark-Hovie-Galer Funeral Home is assisting the family with arrangements.

The family of Elsie Catherine Turley created this Life Tributes page to make it easy to share your memories.

Send flowers to the Turley family.