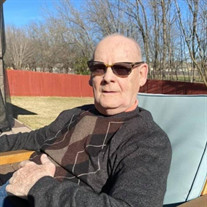 Everette “Roy” Hamilton, age 88, of Rudyard, Michigan, died on January 7, 2022, unexpectedly at his home. He was born on May 15, 1933, in Sault Ste. Marie, Michigan, to Merill and Florence (Smith) Hamilton. Roy’s first love was his family; second was his love of coaching sports and golf. He graduated from Pickford High School in 1952 and attended college for one year before enlisting in the U.S. Army. He served from 1956 until 1958 an then he continued his higher education. He graduated from Western Michigan University with a bachelor’s degree in physical education and then went on to obtain his Master’s Degree in Education from Northern Michigan University. He taught physical education and coached sports at Rudyard High School. He served as the Athletic Director for many years. Roy is fondly remembered as, “Coach Hamilton” to hundreds of young students who participated in Cross Country, Track and Field, JV/Varsity Basketball and eight-man football. He was Michigan’s Class C coach of the Year and was the only coach to win UP Finals in classes A/B, C and D Divisions. He served on the Board of Directors of Munoscong Golf course for many years. Roy also taught Driver’s Education for many summers. He loved having friendly competitions with his old coach, Web Morrison. He was an avid golfer up until nearly three years ago; he played golf into his 86th year. Roy enjoyed designing and building barnwood furniture after he retired. He owned a small woodworking shop on main street in Rudyard. He made many friends while attending craft shows throughout Michigan. Roy is survived by his wife, Judy Hamilton of Rudyard; son, Guy Hamilton of Austin, Arkansas; daughters, Heather Hamilton of Austin, Texas and Tara (Jeff) Ross of White Lake, Michigan; grandchildren, Jace, Nevada, Anika, Everet, and Lilyauna; and brother, Arvid (Theora) of Florida, along with many great friends. Roy was preceded in death by his parents, and sister, Joyce Alley. A Celebration of Life will be held July 30, 2022, from 12:30 PM until 3:30 PM at the St. James Lutheran Church, in Rudyard. Interment will be at Cottle Cemetery, in Pickford, Michigan. Memorials may be made out to your charity of choice in Roy’s honor. Galer Funeral Homes & Cremation in Pickford, Michigan is serving the family. Condolences may be sent to the family at www.galerfuneralhomes.com.

The family of Everette “Roy” Hamilton created this Life Tributes page to make it easy to share your memories.