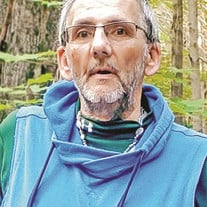 Floyd Alexander Paquin, Jr. of St. Ignace, loved making his livelihood as a commercial fisherman on the Great Lakes. He passed away unexpectedly Friday, December 10, 2021, of a heart attack. He was 61. He was born June 14, 1960, to Floyd and Catherine Paquin of St. Ignace, one of seven siblings, and was known to family and friends as "Sonny" or "Tuffy." He was a graduate of LaSalle High School. He married Patricia "Patty" Huggins of St. Ignace December 27, 1980. They had two children, Cindy and Thomas. As a young man, he worked on the Chief Wawatam railroad ferry, and he maintained an interest in the historic boat throughout his lifetime. He went on to a career in commercial fishing, working first with his father Floyd Paquin, Sr., with his uncles Tommy Paquin and Ron Paquin, and with many others over the years. He was co-owner of a fishing company he established with Mike McNeely, later fishing with Richard and Lynn Rickley and, most recently, working for Massey Fish Company. He loved being out on the lakes. A talented basketball player, he earned accolades in high school as all-state honorable mention and All-U.P. second team and was the Saints' leading scorer in his senior year with an 18.3 average per game. He was a lifelong fan of Saints basketball. Family and friends were a centerpiece of his life, and he was known for his generosity, his friendliness, and his helpfulness to others. Friends were always welcome at his home. He enjoyed following the basketball career of family friend Larry Bird with the Boston Celtics, he liked hockey, and he loved all of the family dogs. Kewanee was a favorite, and there were many others. He is survived by his wife, Patty Paquin of St. Ignace; two children, Cindy Paquin of Mt. Pleasant and Thomas Huggins Paquin of Grand Rapids; his mother, Catherine Paquin of St. Ignace; siblings and their families, Cathy McNeely of St. Ignace, Ed and Ellen Paquin of St. Ignace, John and Pam Paquin of Hessel, Cindy and Doug Miller of Belding, Robert and Kathleen Paquin of Oshkosh, Wisconsin, Andy and Brandi Paquin of St. Ignace, and Joe and Heidi Paquin of St. Ignace; a sister-in-law and her family, Mary and Norm Tamlyn; many extended family members, and many friends. He was preceded in death by his father, Floyd Paquin, Sr.; his wife's parents, Tom and Elaine Huggins; aunts and uncles; a brother-in-law; a niece, and infant grandchildren. A celebration of life gathering will be Thursday, December 23. Family members will gather from 1 p.m. to 2 p.m. and friends from 2 p.m. to 5 p.m. at Cedar Hill Lodge in St. Ignace.

Floyd Alexander Paquin, Jr. of St. Ignace, loved making his livelihood as a commercial fisherman on the Great Lakes. He passed away unexpectedly Friday, December 10, 2021, of a heart attack. He was 61. He was born June 14, 1960, to Floyd and... View Obituary & Service Information

The family of Floyd Alexander Paquin, Jr. created this Life Tributes page to make it easy to share your memories.

Send flowers to the Paquin family.