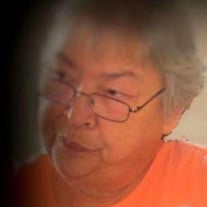 Frances Ann (Smith) Hamel, age 75, of Hessel, Michigan, died on December 1, 2021, at home surrounded by her family. She was born on August 1, 1946, in Sault Ste. Marie, Michigan, to parents Fred Howard and Frances Marian (Causley) Smith. Frances spent her youth growing up in Hessel. She graduated from Cedarville High School in 1964. She married and began her family. In 1965, she moved to Lansing, Michigan, and worked at Zody’s Department store for several years. She then worked at a neighborhood store "Mario’s Market" where she made many great friends. In 1991 she moved back to the Upper Peninsula. She began working for the Hessel Casino retired in 2008 and enjoyed her retired life. Frances was a elder member of the Sault Tribe of Chippewa Indians. Frances loved to read books and spend game nights playing cards with her family and friends. She enjoyed spending time on the computer playing games and browsing Facebook. She lived for her family and grandchildren. She cared deeply for everyone in her life and will be greatly missed. Frances is survived by her son, Anthony “Chito” Hamel of Lansing, Michigan; daughter, Elizabeth “Renee” Hamel of Hessel Michigan; brother, Fred Smith of St. Ignace, Michigan; sisters, Maggie Rounds of Hessel, Nancy Smith of St. Ignace, Betty (Ken) Smith of Hessel, and Patty Chambers of Hessel; grandchildren, Leigh Ann Hamel, Morgan Hamel, Jacob Hamel, and Joshua Williams; great-grandchildren, Damon and Jonas; as well as many nieces and nephews. Frances is preceded in death by her parents, Fred and Frances; brothers-in-law, Buck Rounds and Mike Chambers; sister, Mary (Bill) Albert, Bev (Bud) LaFrenier, and Becky Smith. Visitation will be held Friday, December 3, 2021, at the Anaamianag Nopaming Tribal Center in Hessel from 1:00 PM until 4:00 PM. Services will be held Saturday, December 4, 2021, at the Anaamianag Nopaming Tribal Center beginning at 12:00 Noon. Final resting place will be at the Italian Cemetery, Clark Township, Michigan Galer Funeral Homes & Cremation in Pickford, Michigan is serving the family. Condolences may be sent to the family at www.galerfuneralhomes.com.

The family of Frances Ann Hamel created this Life Tributes page to make it easy to share your memories.

Send flowers to the Hamel family.