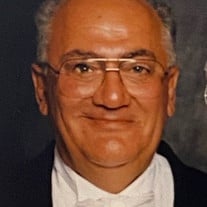 Francis "Frank" Joseph Sasso Jr., age 83, of Drummond Island, Michigan passed away in his home, November 21, 2021. He was born June 2, 1938, in Sault Ste. Marie, Michigan to Frank and Rosalie (Church) Sasso. Frank grew up in the Sault Ste. Marie and Drummond Island area. He joined the U.S. Navy at age 17 in 1955 and over the years worked at several jobs including the Oakland Press and Johnson & Anderson road construction. Frank met Susan on a blind date in 1960 and that was the just the beginning of building a life and family together that would be their legacy. "Old Susan" as he affectionately referred to her worked and managed the household while Frank went to college at both Ferris State College and Northern Michigan University in the 60's earning a bachelor's degree in Business Administration as well as a master's degree in Education along with minors in Accounting and Law, Economics, and Literature. Frank enjoyed a long and rewarding career in education and administration with DeTour Area Schools until his retirement in 1991. Utilizing his humor, intellect and dedication he made a positive impact on countless children through the years. Frank proudly served on the Drummond Island Township Board for 46 years, as Supervisor for 42 of those years. He represented all 16 Chippewa County Townships as President of the Chippewa County Chapter of the Michigan Township Association for over 30 years. Frank enjoyed serving on the War Memorial Hospital Board of Directors for 36 years as well as the Office of Emergency Services Board for 35 years. In Franks 20+ years on the Eastern Upper Peninsula Transportation Authority Board he was instrumental in securing 3 ferries, 2 of which serve Drummond Island as well as 4 docks. In further efforts to represent Drummond Island's interest, Frank served on the County Tax Allocation Board for over 30 years as well as the Recycling Committee. Respect from his peers earned him leadership positions of Chairman or President on all of these boards at one point or another. Improving the quality of life while preserving the sanctity of the island working together with island organizations, as well as county, state and federal officials through continuous road improvements, land management, transportation upgrades, emergency services, and township asset maintenance was Frank's mission since his early days representing Drummond Township and EUP entities. He was a dedicated public servant who led with integrity, common sense, strength and knowledge that will be appreciated by those who will benefit from his accomplishments for many years to come. Frank was a good man! Frank enjoyed politics, hunting, fishing, golfing, boating, jeeping, hunting morel mushrooms, cards with his buddies, reminiscing and listening to and often singing classical music in the shower. He provided endless entertainment with his quick wit, humor, good natured ribbing and recitation of poems from his astonishing memory of literature. He proved to be a very patient and adored father while "supervising" at home too, raising four civic minded daughters with Susan. He was very proud of his children and grandchildren and it showed. Frank was a Navy veteran, a member of the Sault Tribe of Chippewa Indians, the DI Lions Club, the DI Moose Lodge, The Christopher Columbus Italian Society and other such community organizations over the years. Frank is survived by his wife of 60 years, Susan Gay (Fawcett) Sasso, their children, Kimberly (Chad) Cameron, of Drummond Island, Rebecca (Jerry) Newell, of Drummond Island , Nichole (Mike) Sasso-Allison, of Sault Ste. Marie and Suzanne (Brad) Kuusinen, of Drummond Island; grandchildren, Frank (Shannon) Smith, Alex (Caitlin) Smith, Nicholas and Garrett Newell, Cory and Kurt Matkovich, and Claire and Hunter Kuusinen; great grandchildren, Brock and Cameron Smith and Jack Smith; sisters, Cherry Cloudman and Mary "Tess" Hoey of Drummond Island. He was preceded in death by both of his parents, and several brother and sisters in-laws. A Celebration of Life Service with spaghetti and wine dinner will be held Saturday, November 27th at 4:00pm at the Drummond Island Township Hall. Franks cremated remains will be lovingly dispersed at a myriad of locations he enjoyed throughout his lifetime. Frank was dedicated to Drummond Island Township and its supportive organizations most of his life. Memorial contributions may be made to Drummond Island community organizations such as DI Ambulance Corp, DI Fire Department, DI Medical Center, DI Library, and DI Historical Society.

The family of Francis Joseph Sasso, Jr. created this Life Tributes page to make it easy to share your memories.

Send flowers to the Sasso family.