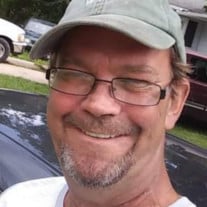 Fred Lewis Hunt IV, age 52, of Brimley and Munising, Michigan passed away peacefully at home with his wife, Kelli (Miller) Hunt by his side. He was born April 12, 1969 to the late Fred Hunt III and Christine Pippin. Fred was born and raised in Johnson City, Tennessee. He married Kelli Miller on July 22, 2018 at Point Iroquois Light house in Bay Mills. Fred had a great love of Classic Country Music, with Waylon Jennings being his favorite. He loved shooting pool, playing poker and blackjack. Fred was an avid sports fan who enjoyed basketball and especially football. He loved teaching sports to his stepson and watching him succeed. He loved the sunshine and being outdoors. He had a love for old cars or anything mechanical. He enjoyed watching the Tennessee Titans and the Dallas Cowboys- he also had a die-hard Tennessee love for Peyton Manning. Fred and Kelli both had a special love for hunting antiques, and they spent most days doing so, together. He was always the life of the party and made sure to leave his mark on everyone he ever met. He loved making people laugh and having a good time was what he was always known for. Fred is survived by his wife, Kelli, and his stepson, Landyn Kessinger. He is also survived by his daughter Brooke (Brandon) Tittle, son Jacob Hunt, granddaughter Braelynn Tittle, of Johnson City, Tennessee in-laws, Jimmie Miller and Melanie Lyons. He is also survived by several aunts, uncles, and cousins and an incredibly special Aunt, Ruby Hall from Johnson City, Tennessee. He was preceded in death by his father, Fred Hunt III, and mother, Christine Pippin. There will be a Celebration of Life followed by a luncheon on Friday, April 15, 2022, beginning at 1:00 pm at the Armella B. Parker Center in Bay Mills- anyone wishing to share a story or anecdote about Fred may do so at this time. Any donations would be gratefully appreciated to help with funeral costs. Flower donations may be sent to the Armella B. Parker center on Friday. Per Fred's wishes cremation has taken place. Clark Hovie Galer Funeral Home assisted the family with arrangements.

Fred Lewis Hunt IV, age 52, of Brimley and Munising, Michigan passed away peacefully at home with his wife, Kelli (Miller) Hunt by his side. He was born April 12, 1969 to the late Fred Hunt III and Christine Pippin. Fred was born and raised... View Obituary & Service Information

The family of Fred Lewis Hunt IV created this Life Tributes page to make it easy to share your memories.