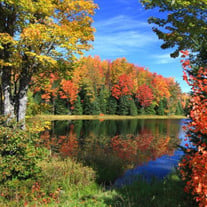 Fred Joseph Mongene, age 90, of Raco, Michigan, died on July 28, 2021, in Sault Ste. Marie, Michigan. He was born on January 14, 1931, in Sault Ste. Marie, Michigan to Joseph and Anna (Brown) Mongene. Fred grew up in Sault Ste. Marie and Hessel Michigan. He began working for Lawrence Vassar in the timber industry, where he met his wife, Virginia Mary Vassar. They married in 1967, in Sault Ste. Marie and began their family. Fred worked for the State of Michigan in the Department of Corrections in the maintenance department. He retired in 1993, but still needed to be busy, so he began working for the U.S Forest Service and retired in 2006. He since has enjoyed his retirement. Fred loved old time country music, especially anything by Ernest Tubb and watching westerns like Gunsmoke. He also enjoyed fishing and always had his faithful cat, Jack. Fred is survived by his daughter, Lisa Dow of Raco and grandchildren, Ashley Dow, David Tadgerson and Jennifer Tadgerson. Fred is preceded in death by his wife, Virginia Mary, son George Mongene, son-in-law Glenn Dow, his parents Joseph and Anna (Brown) Mongene, his siblings, Loretta Miller, Lorraine Miller, Eleanor Germain, Beatrice Willis, Frank Mongene, Joseph Mongene and Kenny Mongene. Per- Fred's wishes no services will be held. Burial will be held at Hillcrest Cemetery in Raco.

The family of Fred Joseph Mongene created this Life Tributes page to make it easy to share your memories.

Send flowers to the Mongene family.