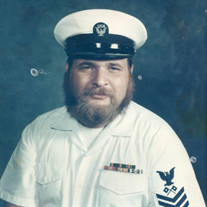 Gary Lynn Nelson, age 76, of Sault Ste. Marie, Michigan, died November 25, 2021, at McKinley Manor in Sault Ste. Marie. He was born on June 1, 1945, in Ladysmith, Wisconsin, to parents Carl and Erleen (Duca) Nelson. Gary spent his childhood in Sault Ste. Marie and graduated from Soo High School. He joined the Navy after high school. After the Vietnam War, he came back to the area and became a Police Officer for the Sault Ste. Marie and Pennsylvania Johnstown Police Departments. He served as a police officer for a couple of years before going back to active duty with the Navy once more. He served over twenty years with the US Navy and retired as a Signalman. He worked a short time as a lineman for the Soo Locks before enjoying his retired life. Gary was a member of the Moose Lodge #717 where he obtained the title of Pilgrim Degree of Merit. He was also a member of the American Legion, Post 3 and the Veterans of Foreign Wars, Post 477. Gary valued his time with his friends gathering on his porch, as well as at the Moose and the American Legion. He spent many hours doing wood working projects, watching NASCAR, and football. Gary is survived by his daughter, Michele Randolph of Salem, Ohio; grandchildren, Aaron (Dana) Bowles and Brandon Bowles; nephews, Todd (Joy) Nelson, Tom (Kim) Nelson; niece, Tracy (Brandon) McKerchie; brother, Gene (MaryLou) Nelson of Sault Ste. Marie; sister-in-law, MaryAnn Nelson of Sault Ste. Marie; and also a good buddy, John (Susan) Belsito of Sault Ste. Marie. Gary is preceded in death by his parents, Carl and Erleen, and brother, Glen Nelson. A celebration of life will be planned in the spring. Clark Hovie Galer Funeral Homes & Cremation in Sault Ste. Marie, Michigan is serving the family. Condolences may be sent to the family at www.galerfuneralhomes.com.

The family of Gary Lynn Nelson created this Life Tributes page to make it easy to share your memories.

Send flowers to the Nelson family.