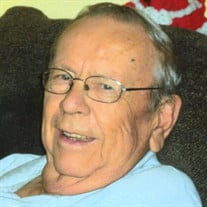 Gerald James Johnson, age 85, of Rudyard, Michigan, passed away at the White Wiles Home in Rudyard, Michigan, on February 23, 2022. He was born on May 20, 1936, in Sault Ste Marie, Michigan, to Benhard and Linnia “Lena” (Oksala) Johnson. Gerald moved from Sault Ste Marie to Rudyard, Michigan, at an early age. He only spoke one language, Finnish, until he was five years old. He graduated from Rudyard High School in 1954. He married Irene Gemmel on March 25, 1955, at St. James Lutheran Church in Rudyard, and next month they would have celebrated 67 years of marriage. They lived in Lansing, Michigan, for a short time where he was employed by Honeywell. After moving back to Rudyard, Gerald was employed at the Rudyard Cheese Plant and then went on to work and retire from the Rudyard COOP Gas Station as the manager for 39 years where he only missed one day of work in thirty-nine years. Gerald enjoyed many sports and belonged to several leagues. He enjoyed many hobbies like, bowling, cribbage, poker, snowmobiling, ice fishing, deer hunting, trapping, hockey, and golf. He looked forward to spending time at the Quagmire Hunting Camp with his buddies, Ken Mills, Wayne Peake, and Eugene Ross. He and Irene loved to travel. They have traveled to Canada and thirty-eight states with their children and friends. He also helped Irene plan and organize most of their class reunions. Gerald is survived by his wife, Irene Johnson; son, Clinton Johnson of Rudyard; daughters, Wendy (Mike) Wiitanen of Houghton, Michigan, and Stacey (Ernie) Povey of Marquette, Michigan; daughter-in-law, Dawn Johnson of Rapid River, Michigan; grandchildren, Stephanie Johnson, Josh Povey, Jason (Kelly) Povey and Jeremy Povey; and great granddaughter, Tuula Povey. Gerald is preceded in death by his parents, Benhard “Ben” and Linnia “Lena” Johnson; sister, Carol; son, Bruce Johnson; mother-in-law, Alice Goodeman Gemmel Sutton; fathers-in-law, John Sutton and Dick Gemmel; and cousin, Ron Mitchell. A Memorial Service will be held on Saturday, June 11th, at 11:00 A.M. at Oaklawn Chapel Gardens in Sault Ste Marie, Michigan. A special thank you to the EUP Hospice and staff of the White Wiles Home of Rudyard, Michigan, for caring for Gerald in his final days.

The family of Gerald James Johnson created this Life Tributes page to make it easy to share your memories.