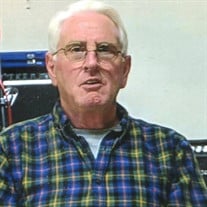 Glen Eric Ludwig, age 72, of Raber, Michigan, died on February 10, 2022, at his home. He was born on May 3, 1949, in Detroit, Michigan, to Thomas Omar and Margaret Elizabeth (Gribben) Ludwig. Glen grew up on Willis Road in Ypsilanti, Michigan and graduated from Lincoln Schools. He married his high school sweetheart, Linda J. King on December 16, 1967. He began working for General Motors, but after a while he decided that was not the job for him. He then began working as a truck driver for Spartan foods. They moved to Raber in 1992 and started Glen’s Cove. After driving truck for thirty-two years, Glen retired and was the handy man around the Cove. Glen was a member of the Teamsters Union # 337 and the National Federation of Independent Businesses. Glen loved sailing and visiting with any guests that came to the Cove. He was a very helpful man and took pride in keeping the property well maintained and groomed. His children and grandchildren were his whole world. Glen is survived by his wife, Linda J. Ludwig; children, Stephen (Andrea) Ludwig of Monroe, Michigan, Brian (Tara) Ludwig of Roscommon, Michigan, Kathy (Eric) Saafranski of Farwell, Michigan, and Eric (Evelyn) Ludwig of Goetzville, Michigan; grandchildren, Trevor (Ashley) Ludwig, Tristan (Caitlin) Ludwig, Julia (Will Cornett) Ludwig, Jordan Ludwig, Kathryn Ludwig, Alexander Ludwig, Sarah (Corey Helm) Moose, Elizabeth (Thomas Beuschel) Moose, Sara (Tyler) Pitchford, Deric (Kayla) Saafranski, Eerin Ludwig, Erica Ludwig, and Milan Ludwig; great-grandchildren, Charleigh, Finley, Freya, Elenor, and Charlotte. Glen is preceded in death by his parents. Visitation will be held on May 21, 2022, from 12 Noon till 2:00 PM at Glens Cove & Resort, 24649 S. Blind Creek Rd., Goetzville, MI 49736. The Funeral Service will follow at 2:00 P.M. Burial will follow at N. Raber Cemetery, in Raber, Michigan. Galer Funeral Homes & Cremation in Pickford, Michigan is serving the family. Condolences may be sent to the family at www.galerfuneralhomes.com.

Glen Eric Ludwig, age 72, of Raber, Michigan, died on February 10, 2022, at his home. He was born on May 3, 1949, in Detroit, Michigan, to Thomas Omar and Margaret Elizabeth (Gribben) Ludwig. Glen grew up on Willis Road in Ypsilanti, Michigan... View Obituary & Service Information

The family of Glen Eric Ludwig created this Life Tributes page to make it easy to share your memories.

Send flowers to the Ludwig family.