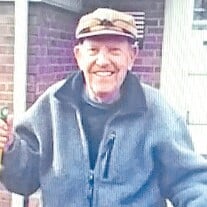 Harold Joseph Sterk, age 93 of St. Ignace, passed away peacefully at his home Sunday, May 2, 2021, surrounded by his family. He entered this world on June 15, 1927, the first born of Joseph Sterk and Medora LaTondress Sterk. He attended the First Ward School, and then LaSalle High School. He voluntarily enlisted in the U.S. Navy at the age of 17 while still in high school, having to get parental consent to join. He served on a LSV Destroyer in the South Pacific during World War II, until after the War ended. He returned to St. Ignace, attending night school to get his high school diploma. In 1949 he met the love of his life, Jean Gibson, at Bentley's Restaurant. They were married March 3, 1951 at the Methodist Church, celebrating their 70th wedding anniversary in 2021. Harold had several careers in his life. He intially worked on the Chief Wawatam car ferry, and also on the Great Lakes ore carriers. He worked for the St. Ignace Department of Public Works for 35 years, retiring in 1989. Harold wore many other hats as well. He was a professional house painter, auto detailer, and together with his wife, operated the Dairy Queen in St. Ignace. Harold enjoyed camping in his trailers over the years, including many summers with his grandsons. He and Jean were also campground hosts at state parks in Indian River and St. Ignace and continued to camp through the summer of 2019. He and Jean enjoyed spending time together playing card games including cribbage and putting together puzzles. They also enjoyed spending winer months in Florida for several years. Harold also enjoyed watching his grandsons in their sports and music activities. Those who knew Harold knew he loved to joke around and he always had a smile on his face. Harold is survived by his wife Jean, four children, James (Kelley)  Sterk of Traverse City, Debbie Sterk of St. Ignace, Robert Sterk of Davie, Florida, and David (Penny)  Sterk of St. Ignace. He is also survived by his two grandsons, Justin Sterk of Newport, Rhode Island, and Jordan (Brittany) Sterk of Owosso. Harold was also proud in the knowledge that he was to become a great-grandfather to a baby boy who would carry his name, in September 2021. Harold is also survived by his brother, Richard Sterk of Cedarville and sister Miriam (Don) Strohpaul of Newaygo, and several nieces and nephews, as well as his good friends Bill and Rosalie Robinson, who were frequent camping partners in later years. He acquired many friends over the years who enjoyed his company; way too many to mention. Harold loved animals and had several dogs throughout his life. Because of this love, the family is requesting memorials be directed to the Mackinac Animal Aid Association, P.O. Box 71, St. Ignace, Michigan 49781. In accordance with his wishes, no services are planned. Burial will be at Lakeside Cemetery at a later date.

Harold Joseph Sterk, age 93 of St. Ignace, passed away peacefully at his home Sunday, May 2, 2021, surrounded by his family. He entered this world on June 15, 1927, the first born of Joseph Sterk and Medora LaTondress Sterk. He attended the... View Obituary & Service Information

The family of Harold Joseph Sterk created this Life Tributes page to make it easy to share your memories.

Send flowers to the Sterk family.