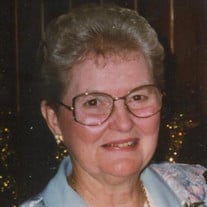 Hattie Marie (Leach) Lockhart Pitko, passed into the arms of her loving Savior, at Cedar Cove Assisted Living in Cedarville, Michigan, on January 21, 2022. She was born on Easter Sunday, April 12, 1925, to Hughie and Marie (McLaughlin) Leach at her grandparents Leach’s farm in Pickford, Michigan. The first few years of her life were spent in various logging camps around Chippewa and Mackinac counties as her father cut timber for a living. When their children were old enough to go to school, Hughie and Marie moved to Pickford. Hattie graduated from Pickford High School in 1943. During high school she won a Kellogg Foundation Scholarship to attend an eight-week short course at Michigan State University. Hattie worked several years at the Pickford A&P store, located where the Post Office is now. In 1945, Hattie married William “Cleve” Lockhart at the Pickford United Methodist Church. They lived on the family farm on Town Line Road, so she learned how to be a farmer’s wife. In 1988, they sold their farm and built a new house on West John Street in town. Cleve and Hatti were very disappointed when they learned that they could not have children, so they began to lead 4-H clubs to work with children. Hattie served on the 4-H council, and they both soon became leaders of the Pickford Community 4-H Club of 80 some members. They also taught people how to square dance. They became involved in Chippewa County Farm Bureau, where Hattie served as their secretary for 15 years. She was also active in the Farm Bureau Women where she served as president, went on to serve as president of the U.P. Farm Bureau Women, and served two terms on State Farm Bureau Resolution Committee. She won a U.P. sponsored a contest on “What Farm Bureau means to the U.P.”. From the time she joined the Pickford United Methodist Church, in 1936, she was very active. She taught Sunday school, sang in the choir, was president of the local United Methodist Women and went on as District Children’s Work officer. Hattie loved to sew and she sewed much of her own clothing. She also made dresses for numerous weddings. Pickford Grange held a sewing contest and her submission won the local contest, went on to win the state contest, and received an Honorable Mention at National Grange. Hattie also loved to knit and crochet a variety of baby outfits for her nieces and nephews. Hattie worked several years in accounting and payroll posting at War Memorial Hospital in Sault Ste Marie, Michigan. She also worked as a clerk for McDonald’s Furniture and Auction Barns. Hattie was involved in the Pickford Township Office for several years, and she also helped with projects for the Historical Society. She was also a leader for the Pickford Senior Citizens, where she was elected the Senior Belle in 1990. Cleve and she served as marshals of the Community Day Parade one year and she also was chosen as the first “Citizen of the Year” by the Pickford’s Lions Club in 1965. When Cleve retired, Hattie decided too as well but Cleve was very bored with no hobbies except his garden. This led them to go to work on Mackinac Island for The Grand Hotel while Hattie worked on the Island as a cafeteria cashier. They lived in Lake Wales, Florida, for thirteen winters. Cleve died in 2005. Hattie married Jim Pitko in 2006, and helped him run “Linger Longer”, his resort on Caribou Lake. When Jim died in 2012, she moved to McKinley Manor Assisted Living in Sault Ste Maire and later to Cedar Cove in Cedarville. Hattie is survived by sisters-in-law, Norma Leach and Marcia Leach; brother-in-law, Conrad Schmitigal Jr.; stepchildren, John J. (Sherry) Pitko II and Kathy (Rocky) Woodward, and their families; sister-in-law, Jackie Pitko; and brother-in-law, Louis (Mary) Pitko, along with all their families. Also surviving are numerous nieces, nephews, great nieces, great nephews, step-nieces, and step-nephews. Hattie is preceded in death by her first husband, Cleve Lockhart; second husband, Jim Pitko; brothers, Jim, Bob, Gerald, and Terry Leach; sisters, Irene Leach, Betty Anderson, and Phyllis Schmitigal; sister-in-law, Irene Alto; and brother-in-law, Karl Pikto Services will be held on Monday, January 31, 2022, at the Pickford United Methodist Church. Visitation will be from 11:00 AM till 1:00 PM followed by the funeral service at 1:00 PM. Burial will be in Cottle Cemetery in Marquette Township in the spring. Galer Funeral Homes & Cremation in Pickford, Michigan is serving the family. Condolences may be sent to the family at www.galerfuneralhomes.com.

Hattie Marie (Leach) Lockhart Pitko, passed into the arms of her loving Savior, at Cedar Cove Assisted Living in Cedarville, Michigan, on January 21, 2022. She was born on Easter Sunday, April 12, 1925, to Hughie and Marie (McLaughlin) Leach... View Obituary & Service Information

The family of Hattie Marie Lockhart Pitko created this Life Tributes page to make it easy to share your memories.

Hattie Marie (Leach) Lockhart Pitko, passed into the arms of...