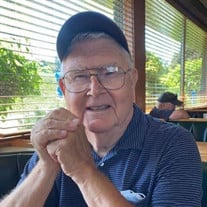 Isaac “Ike” Leonard Bunker, age 83, of Mackinac Island, Michigan, passed on February 9, 2022, peacefully at home surrounded by his loved ones. Isaac was born on Mackinac Island, Michigan in his family home on June 5, 1938, to Marion Bernice and Lewis “Darcy” Bunker. Isaac was the third of seven children. He attended the Thomas Ferry School until 8th grade, in which he had the choice to travel to Saint Ignace, Michigan, to further his education, but ultimately, he chose to go to work to support his family. When he was 20 years of age, he married the love of his life, Josephine “Elaine” Visnaw. Soon after, they would start their family. Ike and Elaine had six children, all who stayed on Mackinac Island, Michigan, and created families of their own. They had a total of seven grandchildren and three great grandchildren. Ike and Elaine were to celebrate their 64th anniversary on February 22, 2022. Ike was a jack of all trades. He was a skilled electrician, mechanic, and all-around handyman. He had several jobs throughout his career, including, working for the MRA, building parts of what is now Mission Point Resort, and even working for the City of Mackinac Island. However, he spent 27 years of his career working maintenance for the Mackinac Island Historic State Park. He eventually retired in 1997 from the State and enjoyed his free time with family, working on home projects and watching the Detroit Tigers and Lions. Ike had many hobbies, including hunting, especially with his father on Bois Blanc Island, Michigan., birdwatching, being outside in the sun, watching sports and going to the casino. But his favorite past time was playing softball. He played any chance he got and even had the opportunity to try out for the Toledo Mud Hens. He played a vital part in creating the ball field at Great Turtle Park and encouraged the youth to get into the sport he loved so much. Isaac is survived by his wife, Josephine “Elaine” Bunker; daughters, Brenda Bunker (Clay Fuller) of Mackinac Island, Jennifer Bunker (Shanrod Nicholas) of Mackinac Island, Patricia Bunker of Mackinac Island, and Marion Bunker (Jay Davis) of Mackinac Island; sons, Isaac Jr. Bunker of Mackinac Island and Clark Bunker of Mackinac Island; grandchildren, Craig Bunker, Melissa Meehan (Bunker), Michael Gamble, Marie Bunker, Nicholas Davis, Vincent Davis and Madison Gamble; great grandchildren, Lakelyn Bunker, Kylee Meehan and Ally Meehan; sisters, Helen Dixon of Rockton, Illinois, Alice Bloswick of Mackinac Island, Michigan, and Irene Rickley of Mackinac Island, Michigan; and brother, Thomas “Tom” Bunker of Mackinac Island, Michigan. Isaac is preceded in death by his parents, Marion (Bernice) Bunker and Lewis Darcy Bunker; brother, Louis “Louie” Bunker; sister, Lula Belle DeArce; and son-in-law, Mike Gamble. No services will be held at this time In lieu of flowers, donations to the Mackinac Island Community Foundation Scholarship Fund and/or Mackinac Island Firefighter Association can be made in honor of Isaac Bunker. As a family, we appreciate all the prayers and well wishes. Galer Dodson Funeral Homes & Cremation in St. Ignace, Michigan is serving the family. Condolences may be sent to the family at www.galerfuneralhomes.com.

The family of Isaac "Ike" Leonard Bunker created this Life Tributes page to make it easy to share your memories.