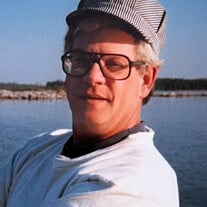 Jack King Storey, 77, of Sault Ste. Marie and Drummond Island, Michigan, passed away at War Memorial Hospital on March 4 after a short illness. He is survived by his wife of 30 years, Jane Mason Storey, brothers, and sisters-in-law Thomas P. Storey (Sandy) of Colonial Heights, VA; Alfred J. Storey (Linda) of Drummond Island, MI; James M. Storey (Diane) of Holland, MI. and brother-in-law Joseph G. Mason (Donna) of Mooresville,N.C. Mr. Storey was born on November 7, 1944, at St. John's Hospital, Cleveland, Ohio. When the family moved to Saginaw, MI, Mr. Storey attended St. Mary's Cathedral elementary and high school, where he lettered in football, graduating in 1963. Matriculating at the University of Michigan, Mr. Storey earned a bachelor's degree in political science and a master's degree in public administration. He continued his education after graduation completing many courses in Native American studies. Throughout his post-graduate life, Mr. Storey was a proud alum of Michigan and ardent follower of the university's athletic teams. Embarking upon his professional career, Mr. Storey was a health educator for Saginaw County. He and a partner founded a sporting goods equipment and clothing store, True North, that operated for a number of years on Saginaw's near west side. In 1979 Mr. Storey joined The (Sault Ste. Marie) Evening News, starting a 29-year journalistic career marked by stellar, clear, and concise writing that earned numerous awards. These include Associated Press awards for sports, feature, investigative, and straight news reporting in 1982, 1984, 1985 and 1987. At the newspaper, he was able to realize his dream of working and living close to the Great Lakes and the majestic freighters that fascinated him from an early age. His celebrated column, the Marine Beat, reflected that passion. During a shooting incident at the newspaper, Mr. Storey is credited with gathering fellow staffers into an inconspicuous, locked room to shelter them from the shooter. Mr. Storey kept on his personal desk a motto that inspired his journalistic career: "It is a newspaper's duty to print the news and raise hell," attributed to Wilbur Storey, the 1861 editor of the Chicago Times. Throughout his adult life, Mr. Storey developed a passion for building and restoring wooden boats and vintage outboard motors. He and Jane spent many summers sailing the waters around Drummond Island on Estelle, a Beetle Cat which they rescued from Massachusetts and he lovingly restored. In addition to his spouse and siblings, Mr. Storey is survived by stepchildren Michael Romant (Jackie), Jeannie Romant-Richey (Calvin), Carrie Romant (Karl Nibbelink) and nieces and nephews Leslie Pitcher, Susan Storey, A. Patrick Storey, Amy Storey, Annika Storey, Dan Storey, and nine step-grandchildren. No services are planned at his request. "Hey, Jack: three long and two short." Clark Hovie Galer Funeral Home assisted the family with arrangements.

Jack King Storey, 77, of Sault Ste. Marie and Drummond Island, Michigan, passed away at War Memorial Hospital on March 4 after a short illness. He is survived by his wife of 30 years, Jane Mason Storey, brothers, and sisters-in-law Thomas P.... View Obituary & Service Information

The family of Jack King Storey created this Life Tributes page to make it easy to share your memories.

Send flowers to the Storey family.