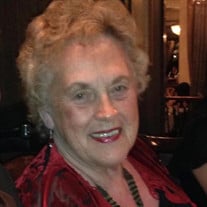 Jacquelyn Ann (Battung) Bolander, longtime resident of Sault Ste. Marie, and currently, Mackinac Island, died at the age of 84 on March 28, 2022, in Petoskey, Michigan. She was born on August 27, 1937 in Pittsburgh, Pennsylvania, to John Anthony Jr. and Heidi (Duscheid) Battung. Jacquelyn grew up in Pittsburgh. In her junior year of high school, her family moved to Euclid, Ohio. Jacquelyn graduated from Kent State University with a degree in Early Childhood Education. She married her husband, Richard Bolander, on July 30, 1960. Jacquelyn and Richard had two daughters, Amy and Ellen. Jacquelyn became a public-school teacher and taught kindergarten and 3rd grade, off and on, for twenty-one years. Jacquelyn was a member of Right to Life of Michigan and a longtime volunteer leader in La Leche League (a non-profit organization which offers support and guidance to mother’s who breastfeed their babies). Jacquelyn enjoyed cruising and traveling the world; her favorite trip was with her husband when they traveled to Uganda, Keyna, and Liberia, Africa. She also loved playing games and cards. She was an incredibly caring and kind woman and won Mother of the Year in Sault Ste. Marie, Michigan. She opened her home to family and friends and those around her by hosting international exchange students for many years and caring for twenty-five foster babies during a fifteen-year period. In 2016, Jacquelyn wrote a book called “The 6 J’s”, which was privately published and provided a photographic and written account of her and her siblings' lives growing up. Her favorite times were those spent with her grandchildren. Jacquelyn is survived by her husband, Richard; daughters, Amy (Paul) Ellinger of Whitmore Lake, Michigan and Ellen (George) Booker of Parsippany, New Jersey; grandchildren, Jackson and Parker Ellinger and Maxwell and Jasmine Booker; sisters, Jeanne Sierka of Arizona, Jill (Larry) Myers of Arizona, and Janet (Jerry) Borack of Ohio; brother, Jay (Mary) Battung of Ohio; brothers-in-law, James (Dodie) Bolander and Robert Myers of Ohio. Jacquelyn was preceded in death by her parents; sister, Judee Myers, and brother-in-law, Dr. Ray Sierka. Funeral services will be held in the spring of 2022 at St. Anne’s Catholic Church on Mackinac Island. Burial will be at St. Ann’s Cemetery on Mackinac Island, Michigan. Memorial contributions may be directed in Jacquelyn’s honor to the Mackinac Island Community Foundation, P.O. Box 1933, Mackinac Island, MI 49757 ( https://www.micf.org/make-a-gift-now.htm) or the Mackinac Island Arts Council, P.O. Box 1834, Mackinac Island, MI 49757 (https://www.mackinacartscouncil.org/donate ). Galer Dodson Funeral Homes of St. Ignace, Michigan, is serving the family. Condolences may be sent to the family at www.galerfuneralhomes.com.

Jacquelyn Ann (Battung) Bolander, longtime resident of Sault Ste. Marie, and currently, Mackinac Island, died at the age of 84 on March 28, 2022, in Petoskey, Michigan. She was born on August 27, 1937 in Pittsburgh, Pennsylvania, to John Anthony... View Obituary & Service Information

The family of Jacquelyn Ann Bolander created this Life Tributes page to make it easy to share your memories.