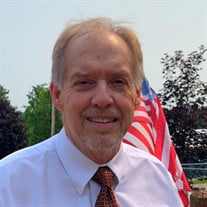 James Stewart Clapperton III, age 71, of St. Ignace, Michigan, died unexpectedly at home on May 5, 2022. He was born on April 20, 1951, in Clare, Michigan to Dr. James Clapperton Sr D.O. and Marjorie Jewell (Nee Fisher) Clapperton. James graduated from Coleman High School in 1969 and attended Ferris State University, where he graduated in 1974 with a bachelor’s degree in Science Education. While in college, he was a member of the Sigma Phi Epsilon fraternity. After graduating, he was a high school science teacher and went on to become a pharmaceutical sales rep in Dayton, Ohio. On one of his many vacations to Northern Michigan, he fell in love with the Straits area and moved to St. Ignace in 1979, when he and his family purchased Chief’s Drive Inn. The next 27 years were spent operating the North Bay Inn. He also operated Pizza Guys and the Tradewinds Motel during that time period. Most recently, James served as the Mackinac Co. Coordinator for Michigan Works, sold real estate, as an agent for Mackinac Properties in St. Ignace, and served as a City Councilman for the City of St. Ignace. He enjoyed working, helping people, and public service. He was Past-Master of St. Ignace Masonic Lodge #369, a 32nd degree Mason, and a Noble in the Shriners, Valley of Marquette. James is survived by his fiancée, Shannon Brown, and daughter, Alyssa Clapperton of St. Ignace; his daughter and son-in-law, Erin and Ray Laakko of Minnetonka, Minnesota; son and daughter-in-law, James and Jamie Clapperton of Vashon, Washington; stepdaughters, Chelsea (Michael Causley) Brown and Casey (Andrew Dixon) Brown of St. Ignace; grandchildren, Elias, Max, Joelee, Audrinna, Declan, Myles, Braden, Preston, and Adlee; sister and brother-in-law, Melissa and Bill Cozat of Coleman, Michigan; and four fur babies, Bella, Darla, Quinny, and Boo. He is preceded in death by his mother and father. A Private Masonic Memorial Service will be held at Galer Dodson Funeral Home, 240 McCann in St. Ignace on Friday, May 13 , 2022, and the Memorial gathering will be held from 6:30 P.M. till 8:00 P.M. Galer Funeral Homes & Cremation, of Pickford, Michigan, is serving the family. Condolences may be sent to the family at www.galerfuneralhomes.com.

The family of James Stewart Clapperton III created this Life Tributes page to make it easy to share your memories.

Send flowers to the Clapperton family.